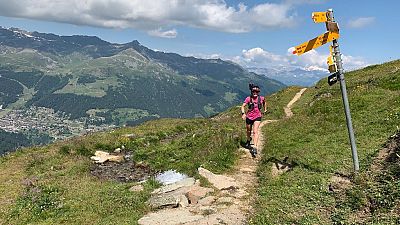 This year, more than ever, many of us are wanting to escape our hectic lives, get outdoors and enjoy nature. For many, the call of the mountains is stronger than ever.

This is good news for ski resorts who, due to shorter winter seasons, are looking to diversify by offering year-round activities like mountain biking, canyoning, and one of the fastest-growing sports worldwide right now: trail running.

Races and new routes are popping up anywhere there's a hill. But it's not just a sport for elite athletes. Anyone can discover new and amazing places through trail running.

But for many of us, taking quite such a big stride into the wild may be a step too far. That's why the Swiss resort of Verbier, better known as a favourite ski destination for UK royalty and having a ski lift named after the singer James Blunt, is 'uber-ising' running.

With just a few hours to spare you can call up Valais-based 'BeeHiedi' who will give you a trail running experience set in dramatic mountains, thick forests and lush pastures with a local guide, for as far and as intense as you want it.

From 9-5 Frederic Martin is a banker in the Swiss town of Sion. The rest of the time, he's clocking up the kilometres along the mountain trails of Verbier, Val de Bagnes, and the Pays du St-Bernard.

Fred started running along the trails around his home and now he shares this passion with his wife and as a trail running guide.

The iconic ski resort of Verbier has over twenty signposted routes to give both experienced and amateur runners the chance to explore its glaciers, green pastures, and impressive dams, as well as those of the Val de Bagnes and La Tzoumaz.

The 415 kilometres of trails with more than 33,000 metres of ascent were put together by local runners who have a deep connection with the sport and the region and know a lot about its rich cultural and natural heritage.

But for those unfamiliar with the territory, it may seem a little daunting to head out on the trails to run solo.

That's why last year Valais-based 'BeeHeidi' was launched, offering 'a la carte' outings allowing you to choose the pace, duration, and location of your run before being picked up at your accommodation by one of 30 local guides who can share their favourite trails, local knowledge and top places along the way.

Founder Sandra Rouiller even named the company after her grandfather who was a beekeeper and alpinist who gave her a love of the mountains that she now wants to share.

Fred meets us at our hotel in Verbier and we debate whether to take the Medran cable car up the mountain or run up through the pine forest for about 800 meters. Not wanting to miss lunch at the Cabane Mont Fort, we decide on getting a ride.

Beginning at an altitude over 2000m doesn't give us much time for 'acclimatisation' however. After ascending a gentle mountain bike path for a few minutes I'm out of breath, before we've even taken a sharp climb leading us to stunning views of across the ski resort, La Tzoumaz. Here we decide to walk for a while, whilst discussing Swiss politics.

Fred tells me the path we are on is the start of the 111km X-Alpine race across Verbier and Saint Bernard. I'm curious as to how one prepares for a race like that: "It's all in the head," he says, "no need to up your training from a normal 50km".

As the steepness eases I pick up the pace, rock-hopping across little streams until we stop to admire the sparkling Lac des Vaux.

As we continue on towards the Cabane Mont Fort where we are due to stop for lunch, we pass a herd of black Herens -- Switzerland's most renowned breed of cow.

"Herens naturally fight" says Fred, "If you leave them together in the mountains they will fight to sort out who is boss."

It's this characteristic that has given rise to the tradition of organised cow fights throughout the canton of Valais.

As I jog past some disinterested looking Herens with caution, Fred warns me to be careful around black cows, "especially at the beginning of the season, because they have their babies so they can be...tricky. They are normally really passive but I've had problems in the past."

We reach Cabane Mont Fort where we are met by another Beeheidi running group. A hot chocolate and an egg-topped rosti are also waiting for us; not traditional trail running fodder, but we relax for an hour to let it digest. At least it's mostly downhill from now on.

Over lunch, I ask if it's been quieter this summer. But it seems almost the opposite is true: "very busy," says Alistair Davidson, a regular Beeheidi runner based in Geneva. "Everyone is staycationing, particularly the Swiss Germans. People feel it's safer being in the outdoors."

After lunch, we begin a gentle descent by running on narrow paths alongside a tiny irrigation canal, the Bisse du Levron.

Bisses can be found all across Valais, with some dating back to the 13th century. Often following daring routes across arid pastures, vineyards and orchards, they've become so iconic in Switzerland that the dramatic Bisse d'Ayent became the illustration of the new 100-franc note that went into circulation in September 2019.

At one point our path is blocked by a traffic jam of goats looking at us curiously, the sound of their tinkling bells filling the air.

Soon we reach the tree line and the descent gets much more technical, with roots joining the rock sharks to trip us up.

"I love to go downhill," says Fred, "it's the best exercise, although your legs will be destroyed after 1000 meters descent. You have to be confident, that's the main part.

"But if you're starting out you can try running as if you are sitting in a chair and just moving your legs."

"You will feel stupid, but it works well, and then when you are confident, the best way is to let everything go, but you have to have faith in your legs and your shoes."

After 1000 metres downhill, it's true, my legs are feeling a little destroyed, but I'm exhilarated and ready for a beer. Fortunately, Fred also has knowledge of the best bars in Verbier and delivers us straight there to toast the day's trails.

Additional Activities (for your information):

Transfers by train: The Swiss Transfer Ticket covers a round-trip between the airport/Swiss border and destination. Prices are 124 euros in second class and 200 euros in first class.

The VIP Pass offers free entry or discounts to more than 25 of Verbier’s top activities and attractions and is delivered to every guest staying a minimum of one night in the region and paying the tourist tax. Available 1 June - 27 October 2020.

Travel: Morzine, the alpine resort that moved an international border