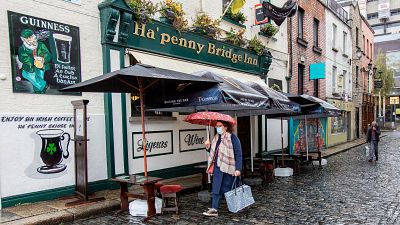 COVID-19 deaths in the European Union and the UK surpassed 200,000 on Monday as new measures to halt the spread of the virus are being rolled out across the continent.

According to the European Centre for Disease Prevention and Control (ECDC), 201,151 people have now lost their lives to the novel coronavirus in the EU/EEA and the UK. The number of infections is now approaching 5 million.

Europe has been fighting a second wave of the deadly virus with governments favouring local measures to national lockdowns.

Ireland became the first European country to announce a return to a full lockdown, with the entire population to be reconfined for six weeks.

Prime Minister Micheal Martin made the announcement on Monday evening, with the lockdown coming into force on Wednesday at midnight. Schools, he said, would remain open.

A raft of new restrictions came into force in Italy on Monday, after being announced on Sunday by Prime Minister Giuseppe Conte, with the country dealing with daily highs of infections.

Restaurants now have to display their maximum capacity outside, and close doors by midnight, while bars will have to close at 6pm if they don’t have table service.

Private sector companies are encouraged to follow the public sector in increasing the number of employees working from home, while local festivals will be banned along with amateur sports.

It had already put extra measures in place in the northern Lombardy region, where the European outbreak began in late February. Here alcohol sales and service at bars is limited, and sports had already been banned.

The regional government on Friday called for high schools to adopt hybrid schedules, with students alternating in-person with online learning.

Wales has announced a strict, 17-day “firebreak” lockdown on Monday, starting on Friday. This is essentially a full lockdown, with only critical workers and those that cannot work from home allowed to travel to work.

Everybody else will be expected to stay indoors, while all non-essential retail shops, leisure services, restaurants, pubs and cafes will be closed.

“If we do not act now, infections will continue to accelerate and there's a risk our NHS would be overwhelmed,” Drakeford said.

Bars, cafes and restaurants are shut in Belgium from Monday for a month.

There is also a curfew in place, between midnight and 5 am, with Belgian Prime Minister Alexander De Croo highlighting the "exponential" growth of the pandemic. An evaluation of the measures will be made after two weeks.

Belgium has now recorded 222,253 cases of coronavirus - more than double the figure from just one month ago.

The chancellor of Austria, Sebastian Kurz, announced on Monday that from Friday private gatherings will be limited to six people indoors and 12 people outdoors.

Also professional events such as football matches and operas will require assigned seats and mask-wearing throughout, with a maximum of 1,000 people indoors and 1,500 outdoors.

The country is currently seeing its highest daily infections since the start of the pandemic, with spikes of up to 1,750 a day.

France reported a new record number of cases in 24 hours on Saturday, with 32,427 according to the public health agency.

In Paris and eight other French cities, restaurants, bars, cinemas and other establishments were being forced to close no later than 9pm to try to reduce contact among people. The country is deploying 12,000 extra police officers to enforce the new rules.

Many restaurant owners have bristled at the order. An earlier months-long lockdown devastated the sector.

"I have the right to question the government's approach, I think it's a catastrophic measure for the industry,'' said Xavier Denamur, who owns Les Philosophes and several other bistros in Paris's chic Le Marais district, saying that if nothing else, the curfew should be 11pm.

"At least that would not destroy us,'' he said. "There's no evidence that this difference of a couple of hours will have any effect on the virus circulating.''

On Saturday, tier-2 cities like London and York were subject to a ban on socialising with people from other households indoors, while the county of Lancashire joined Liverpool in tier-3 with the tightest restrictions.

Among other things, that means pubs have closed and socialising with others is banned even in many outdoor settings.

In Northern Ireland a lockdown lasting four weeks came into force on Friday. All pubs and restaurants must close except for takeaway services, and schools will close for two weeks for an extended half-term holiday.

Data from Friday showed that a further 136 people died in the UK within 28 days of testing positive for coronavirus, bringing the total official toll to 43,429.

The World Health Organization (WHO) has warned that intensive care units in a number of European cities could reach maximum capacity in the coming weeks if the number of infections doesn't slow.

Austrian Foreign Minister Alexander Schallenberg joined the list of top politicians who have tested positive for the virus, and was quarantined, although he showed no symptoms, his office told Austria's APA news agency.

The wearing of masks is compulsory from Monday in closed public places throughout Switzerland, the federal government announced on Sunday.

"The sharp increase in the number of contaminations in recent days is worrying," the Federal Council said in a statement.

The Vatican, meanwhile, said someone who lives in the same hotel as Pope Francis tested positive for the virus, adding to the 11 cases of COVID-19 among the Swiss Guards who protect him.

German President Frank-Walter Steinmeier, the country's head of state, was quarantined while awaiting the results of a coronavirus test after a bodyguard was infected, his office said.

Germany, which was widely lauded for rapidly slowing the spread of the virus when the pandemic first broke out, has seen rapidly climbing numbers in recent days.

Like most countries, Germany has been grappling with how to keep schools and businesses open while trying to prevent people from coming into close contact with one another.

Germany has registered a total of 356,387 coronavirus cases and a relatively low 9,767 deaths.

Chancellor Angela Merkel urged people to come together like they did in the spring to slow the spread of the COVID-19.

"Difficult months are ahead of us,'' she said in her weekly video broadcast. "How winter will be, how our Christmas will be, that will all be decided in these coming days and weeks, and it will be decided by our behaviour.''

"What brought us so well through the first half year of the pandemic?'' she asked. "It was that we stood together and obeyed the rules out of consideration and common sense. This is the most effective remedy we currently have against the pandemic and it is more necessary now than ever.''

In neighbouring Czech Republic, the number of new infections surpassed 10,000 for the first time, surging to 11,105 on Friday, the Health Ministry said. The country has now registered a total of 160,112 cases, including 1,283 deaths.

Despite new restrictive measures to slow the surge, Health Minister Roman Prymula said he still expects a rise in those testing positive for about two weeks.

Next door, Slovakia said it was acquiring 13 million rapid antigen tests - enough to test each member of the population twice - and would establish 6,000 testing sites.

Prime Minister Igor Matovic said testing will take place over the next two weekends, starting with the three or four hardest-hit counties. It was not immediately clear whether tests would be mandatory.

Authorities in Poland announced on Monday that the National Stadium in capital Warsaw is being transformed into a 500-bed COVID-19 field hospital. The country is now experiencing an exponential surge of coronavirus infections after recording low rates of infections compared to other Western European countries in the spring.

Schools in Romania's capital, Bucharest, as well as restaurants, bars, theatres, cinemas and gambling venues were ordered shut on Monday due an increase in COVID-19 cases. Authorities said the capital has entered a "red scenario" with more than three infections per 1,000 inhabitants.

The country as a whole reported 15,982 infections on Monday, the highest daily increase recorded since the beginning of the pandemic.

Further afield, the world's worst-affected country with the most deaths and most cases recorded so far, the US, recorded its record number of cases since July.

The US reported more than 69,100 new Covid-19 infections on Friday - the most in a single day since about 71,300 were reported July 29, according to Johns Hopkins University data.

When it rains, it pours: Floods hit Cork on last day before lockdown