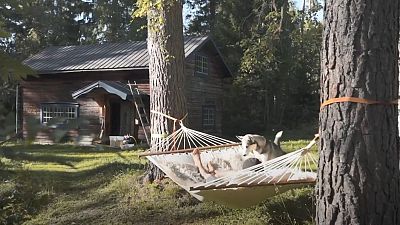 Would you ditch the city life and move to a forest cabin?

Kalle Flodin’s YouTube channel went viral after he posted a video showing his ‘simple’ life in the woods of sub-Arctic Sweden.

He moved to his remote forest cabin in 2018 to escape the city and now spends days hanging out with his pet husky and telling stories through my camera lens and in writing.

Of his decision to live the ultimate ‘socially distanced’ life, Kalle says "at the age of 29 I felt stuck. I was living in an apartment in Stockholm and was doing 9 – 5, so I had everything that I was “supposed” to have. But still, something was missing: a sense of purpose and meaning."

Kalle started writing a list of both the positive and negative things about himself and the environment he was living in. After a while he decided there were more negative things, so he decided to start deleting them from his life.

"I had a dream about having nature as my closest neighbour, not just live in the middle of the forest, actually be a part of it and follow the seasons," he explains. So he bought an old log cabin in the north of Sweden, near a small village with only eight inhabitants; "Six hours away from everyone I know".

Siberian Husky, Tuss came into Kalle's life when he decided he wanted a more active lifestyle. She needs a lot of exercise, such as running and sled-pulling so they quickly became best friends.

As beautiful as it looks, without running water or electricity, it’s not all rainbows and butterflies.

"During my first winter I had -25 degrees Celsius in my bedroom, everything from olive oil to deodorant froze," says Kalle.