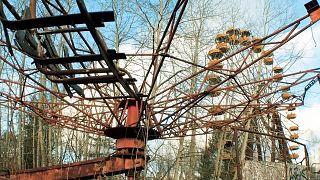 It was initially a young, vibrant and wealthy place — but the nuclear meltdown of 1986 at the nearby Chernobyl Power Plant has left it empty and abandoned bar a handful of tourists visiting the devastation.

Founded on February 4, 1970, just two kilometres from the Chernobyl Nuclear Power Plant, it was evacuated after the disaster at the plant.

Now, it is a haunting destination for tourists exploring the Chernobyl exclusion zone.

They venture into its streets, through squares overgrown by nature, to glimpse a town frozen in time.

After the 2019 HBO series "Chernobyl" was released, it became an increasingly popular tourist destination.