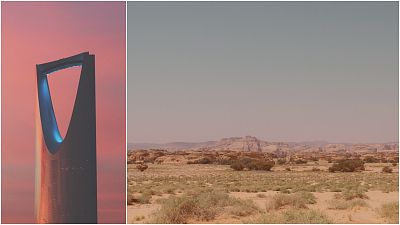 In the shadow of the first anniversary of journalist Jamal Khashoggi’s murder and amid escalating tensions in neighbouring Yemen, Saudi Arabia has opened its doors to tourism for the first time.

The fact is, Saudi has been cut off from many Westerners until now. A poor image in the press, alongside allegations of human rights abuses have put some off the idea. That’s not to mention the difficulties in getting a visa.

Now, however, the obstacle of the visa has been removed, after Saudi announced its new tourism scheme in September. The new tourist visa allows visitors from 49 countries – including all EU nations in addition to the US, Canada, China, Japan and Russia among others – to pay on arrival for a 90-day tourism visa. It comes at a cost of 440 SAR plus VAT, equivalent to £92/€106/$119.

The tourism board hopes the new visa will make it easier for people to discover the land for themselves. And it’s fair to say there is much more to discover than many realise.

Read more |An unfiltered guide to getting around in Saudi Arabia

Much of Saudi Arabia was underwater millions of years ago, and it shows in the landscape with rocks jutting out across the desert, forming what used to be shelves and coral reefs. Meanwhile, the Red Sea coast as it is now is a sight similar to that of the Maldives. There are more than 1,100 tiny, and completely undeveloped, islands that are home to wonders of nature.

But for Westerners to uncover the sights and sounds of Saudi, they’d have to be convinced that either their negative perceptions have been exaggerated or that the country has changed. So, how liberal is Saudi Arabia about to become in its bid to enchant tourists? And at what cost?

Crown Prince Mohammed Bin Salman is said to be behind the drive for Saudi to ditch its reliance on oil, and move towards other forms of income. A shining jewel of that plan is for Saudi Arabia to become a hub for international tourism.

It has experience of tourism as the site of the world’s largest pilgrimage site at Mecca, seeing nearly 1.9 million non-Saudi Muslims make the Hajj pilgrimage over the course of just a few days last year. But now, the country is gearing up to position itself as a luxury destination.

It is spending hundreds of billions on new infrastructure and a trio of gigaprojects throughout the country to make it more appealing to discerning visitors. These audacious plans include building Saudi Arabia’s first ski slope inside Riyadh’s upcoming Mall Of Arabia shopping centre, and creating the Neom super city on Saudi’s Red Sea coast.

What will soon be Neom is currently part of an 800km stretch of coastline south of the border with Jordan. As it stands, it doesn’t yet feature a single five-star hotel or resort.

Multiple sources told Euronews Living that the Saudi government was in “advanced talks” to allow alcohol in the country, nearing the stage of being “ready to sign” agreements permitting alcohol in resorts such as Neom. Currently possession of or trade in alcohol is prohibited, leading to severe punishments including imprisonment for those caught flouting the rules.

Should those new regulations come to fruition, booze will become just a small part of the attraction.

The government has said it is committed to maintaining Saudi’s unique selling point, which brings together landscapes like those of the US’s grand canyon, the Maldives’ seas and ancient cultural attractions. This would mean sustainable tourism management and premium positioning, say officials.

“Once we identify an environment, we put a coastal management plan into place,” says Captain Ahmed Shaker, associate director of the Marina & Yacht Club at King Abdullah Economic Centre north of Jeddah.

“So if we find a beach where turtles nest, it’ll be off-limits except to very small numbers of conservationists and eco-tourists who’ll access them in a way that doesn’t disturb the wildlife. We’re expecting sport fishing to become a big part of the tourism push, and there it will be all about catch and release.”

Shaker is passionate about preserving the oceans surrounding his homeland. “Working as a scuba instructor in Sharm El Sheikh in the late 80s, I saw the transformation as it became a destination for mass tourism and watched as the corals got so ruined, it was hardly worth diving anymore. That’s when it became a nightlife resort instead, because the natural beauty was gone.”

Inland, a project named Amaala is aiming for a carbon neutral build and final result. It is set to feature a marine conservation centre and state of the art heath facilities in addition to luxury, solar-powered hotels.

Read more | How do you make a luxury tourist destination zero carbon?

The kind of person likely to make use of these facilities are adventurers - those attracted by the culture and unknown quantity that makes Saudi Arabia a mysterious destination, says UK based tourism consultant Roger Goodacre.

"Saudi is hardly in danger of becoming a mass tourism destination," he says. "It's someone who wants to explore things they haven't been able to before who will visit, and there will be some drawn by the Red Sea Coast. It's perhaps the last unspoiled diving destination of its kind on Earth."

Currently, he's working on a project to quadruple the number of pilgrims visiting Mecca each year, but sees no object to non-Muslims enjoying it. "Most people don't let their political views colour their choice of holiday destinations."

How Western will Saudi go?

Meanwhile, liberalisation is well underway, according to Goodacre. "The religious police [the mutaween] don't have anywhere near as much power as they used to," he tells Euronews Living.

"Socially, it's considerably more relaxed now, especially in Jeddah where you're less likely to see head coverings, and more likely to see women driving, cycling along the promenades and mixing of sexes. It would all have been unthinkable until recently."

The repressive state that many envision is open to further change, adds Ahmad Al-Khateeb, chairman of the Saudi Commission for Tourism and National Heritage.

“Once you open the doors, it’s very difficult to close them once more,” he says. After all, the commission want visitors to be “surprised and delighted by the treasures we have to share”. He counts among them “five UNESCO World Heritage Sites, a vibrant local culture and breathtaking natural beauty”.

Amr AlMadani, CEO of the Royal Commission for AlUla, stresses that you have to have lived in Saudi Arabia long enough to see the change, but points to lifting the ban on women driving last year as a pivotal moment.

Now, he wants to make AlUla - which formed the southern hub of the ancient Nabatean civilisation - the “largest living museum in the world”. Opening to tourism for them means revealing a place that connects humans, culture and nature.

"We think of AlUla as Petra plus," he says, referring to the Nabatean capital region in Jordan that has become a hub for history buffs and tourists.

And the question of the covering up? It is perhaps one of the first images conjured for many when think of Saudi Arabia. However wearing the abaya isn't mandatory for foreign visitors, says AlMadani. "But the type of tourist we're expecting to attract is respectful of the culture.”

Ultimately, opening the floodgates to tourism while maintaining respect for Saudi’s cultural heritage and natural environment may be tough. But it is the challenge its government has chosen. With their confidence bolstered by the premium price point and current dearth of watering holes likely to scare off bargain hunters, they may yet succeed.