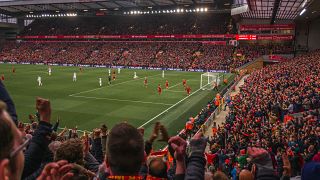 Originally from Bulgaria but based in the French city of Lyon for more than a decade, Domo's lens captures memorable instants in the heat of the moment.

His pictures instantly transport us to the most exciting scenes. Stare at the photo and you feel it all, the euphoria, the hard work, the goal, the team, the hope: the football.

As a storyteller of the sports universe, Domo seeks to capture the second when the tension between the players and the fans intertwine. But he does not limit himself to sports as he's also seduced by street and landscape photography — especially during the twilight hours.

Domo is passionate about achieving that one picture that says it all, the one that, upon seeing it, makes you feel like you were there.

Euronews had the pleasure of speaking with him to find out more about his work. This was our conversation:

How did your photography journey start?

I've been kind of into photography ever since my teenage years. I started borrowing my father's film camera on school trips and using disposable cameras when attending football games. Photography has always been part of my journey. Of course, back then, everything was done at an amateur level, but taking photos while travelling, or capturing the atmosphere during a football match was something of importance to me: to create memories and keep them on paper.

However, I only really got into photography when I started following other photographers on social media. Instagram and all the possibilities you have online to learn about photography have been an inspiration, and this is what has motivated me to further develop my skills.

When the Euro 2016 was in France I decided to capture the atmosphere and share it on social media. This had a very good response, people were into it! And this is how I got my first contacts, and since then it has only gone upwards.

What are your travel essentials and what camera do you use?

What is the one thing you wish you knew when you started taking photos?

I wish I knew how powerful social media is when you're keen to grow and improve.

How would you describe your style of photography?

I guess it's a mix of photojournalism and sports photography. Also, I always try to tell a story when shooting at a sports event: capturing the before and after, for example, makes good storytelling.

I also enjoy landscape and street photography, which is what I shoot when I am travelling.

What is your favourite place or thing to photograph?

I really enjoy photographing football games, at sunset or under floodlights. Capturing the passion of fans around, and inside the stadium; and the expression of the players on the pitch. I also love to shoot urbanscapes at sunset, or just sunsets, yeah, I like sunsets.

Favourite European location and why?

There isn't just one, but I'd say Marseille for its diversity. It has so many different places to photograph: architecture, sports, landscape, portrait, street, food, passion, anything you can think of, you can find it in Marseille. Also the Algarve region in Portugal, where you can find some of the best beach landscapes.

There are a lot of photos that I have in mind, but this one may just still be my most memorable. The one I will always remember.

It was from the first French National Football team game that I had the opportunity to photograph. It was just after the European Championships in which France had gone to the final. Dimitri Payet was maybe their most influential player during the tournament. So when he came to take the corner just in front of me, it was a "wow" moment for me. I shot with wide angle lens so we could see the whole stadium while having Payet in the foreground.

Are there any things that you would never want to photograph?