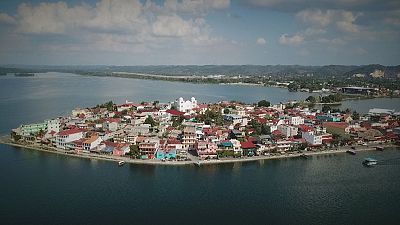 Guatemala is the gateway to the Mayan world through its ruins and a culture kept alive by its people and the stories they tell.

"Petén means island and Itzà means wizard or shaman. All the islands were inhabited by shamans."

Today, Flores has no shamans but something of a colonial atmosphere with small restaurants and terraced houses lined up along cobblestone streets.

"The town's layout is in keeping with the Maya civilisation," he said.

"Temples were found in the middle of the urban centre, at the highest place, and the houses move away from the religious centre according to the status of the families."

In its heyday, Flores had pyramids, statues and temples. The main one lies underneath the church and next to it we found some original steles. They were sacrificial altars.

"These glyphs are phonetic symbols," our guide told reporter Monica Pinna, pointing to inscriptions on a stele.

"This one means 'the great lord of Tikal'. It illustrates the fact that the governor of Tikal took part in a ceremony celebrated in nearby Ixlu."

Tikal, some 60 kilometres north of Flores, was one of the largest urban centres of the pre-Columbian Maya civilisation.

Today, it's a fascinating site where temples and acropolises are spread all over the rainforest.

This whole region hosts hidden treasures. Back at Lake Petén, we walked up Mirador Canek. The hill covers an unearthed pyramid, like many others around.

"This point was the observatory of a governor called Canek. It was a ceremonial site," Ivo explained.

"The administrative and political centre was on the island of Flores. This was a strategic, supervision point."

The dozens of archaeological sites around the water are not the only interest in the Petén area.

Touring the lake, Guatemala's second biggest, there is the chance to relax and have fun. You can also spot wildlife and discover authentic villages.

However, you can't really say you have delved into a culture without sampling its food.

So the best way to finish a lake tour is by trying its fish, the Petenia Splendida, typical of lake Petén. It's served alongside all-important tortillas, made with corn flour.

"Corn is among the main legacies of the Maya culture, through the God of corn, Yum Kax," said restaurant manager Nyglan Jau.

"From that time until today, corn has probably been the main basis of Guatemalan families' food."

This white fish is served with spicy sauces and refreshing local juices.

Guatemala is above all its people and traditions. Each month and each region has its own. In Flores we met the "enhiladeras", women who create church decorations by threading flowers onto sticks, during May, the month of the Virgin Mary.

"This tradition is over 100 years old," said one of the women, Mirtala Zeitina.

"We invite friends and family to thread the flowers."

As Guatemala keeps its traditions alive, the mysteries of the Maya civilisation are still being revealed.