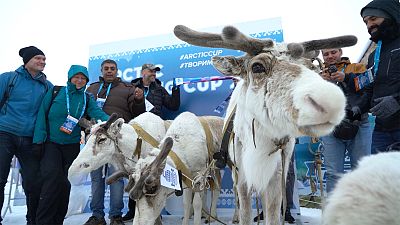 To discover real Siberia and become its ambassadors...that was the goal of the first group taking part in the 'Follow Up Siberia' programme, organised by Russian firm Nornickel.

"I am from Serbia and this is Siberia," said one of the adventurers, Milos Petrovic.

"It's really winter! It's cold and those reindeers, oh my God, it's beautiful! It is the first time for me to see this, live!"

Travellers also saw the legendary Sopkarga Mammoth which died 48,000 years ago and they learned about the Putorana Nature Reserve. It is on the UNESCO World Heritage List.

"Siberia is the holy grail of unique"

“I like unique, one of a kind, places, and, for me, Siberia is like the holy grail of unique," said fellow traveller Raymond Walsh from Canada.

"My goal here is to dispel some of the stereotypes that are existing right now about Siberia -  that it’s cold, that it’s vast, that there is nothing to do, and I want to show people that there is actually a lot to do here.

"I did not realise that Norilsk, for example, is such a big place.”

The travellers had a chance to see one of its landmarks - the historic Nornickel Bear Creek open pit "Zapolyarny" mine.

It is some 420 metres deep with a total road length of around 30 km, while underground works spread for 41 km.

"The uniqueness of this pit lies in the fact that the firm has been developing reserves of copper-nickel ores here since 1945," explained Igor Uvarov of “Zapolyarny” Mine, Bear Creek LLC.

Next stop was the Nornickel Copper Plant, built beyond the Arctic Circle in 1949.

There, our travellers learned more about the history of the city, which basically grew around metallurgy. Nornickel is 15 years older than Norilsk!

“It’s, for sure, a rare chance to get here so I am excited," said Anne, a blogger from Finland and another member of the 'Follow Up Siberia' group.

In Dudinka, 100 km from Norilsk, our adventurers were specials guests at the WCT Arctic Curling Cup.

First they watched the world's best competitors in action. Then they had a curling lesson from 15-year-old local sportsman Veniamin Bezrukih. He studies at Dudinka's curling school and got great results in the junior competition, organised during the Cup.

"Curling can be compared with chess. But tenacity is the main thing," Veniamin said, sharing his expertise.

The next day, our visitors returned to the world’s northernmost arena to battle it out against the Arctic Cup media team.

Serbian Milos and Vikram, from India, won the silver medal!

"For the first time, I play curling over here," confessed Vikram Kamboj.

"In India, it's not a very common thing, because we do not have any snow and ice. I enjoyed the curling and it's wonderful."

The travellers also went through a special Taimyr initiation ceremony, based on the legends and history of the people who inhabited this peninsula throughout the centuries.

"It is the most beautiful place I have ever seen in my life!"

"It's really nice. I have a feeling that I am in some centuries and centuries ago," said Milos.

These travellers will go back home to become ambassadors for Siberia ahead of the 29th Winter Universiade for student athletes next year in Krasnoyarsk.

"It is the most beautiful place I have ever seen in my life!"

"It's very energetic. The people are very friendly and it's blooming," he said.

'Europe not cause of UK's problems', says UK's Liz Truss in old audio