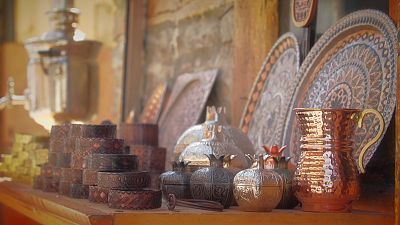 Lahic, one of Azerbaijan’s oldest villages, was once the country’s copper mining capital, producing copperware that was exported across the Middle East.

It’s always been isolated by its mountainous setting, and hardly anyone visits in the harsh Caucasian winter when its rugged paths become impassable.

In summer however it’s now drawing tourists attracted by a quality of craftsmanship that has almost died out in the rest of Europe.

Centuries ago, the mountainous terrain around the village ruled out farming so, to eke out a living, the locals turned to the abundant copper deposits in the mountains.

And as the generations passed many families became not only greatly accomplished coppersmiths, but also carpet weavers and leather workers.

The Aliyev family has been beating and inscribing its copperware for seven generations with each craftsman inscribing their work with their name.

“What I like most (in my work) is that my name is there. In 150 or 200 years later someone will look for me on the internet and see who I was,” Kableyi Aliev, told Euronews before going back to his work fashioning intricate patterns into a copper plate.

Aliev’s workshop is only one of five still working. Just over a century ago the village had more than a hundred; it’s a way of life that is fast disappearing as the young migrate to bigger towns and cities.

Tat, an unwritten language of Persian origin, and not Azeri used to be the village’s lingua franca, but like the metal smiths, it is also fast disappearing and now has only a few thousand speakers left.

Today the language is “severely endangered” according to UNESCO, the UN’s cultural agency, meaning that, whilst the parent generation may understand it, they do not tend to speak it to their children or even amongst themselves.