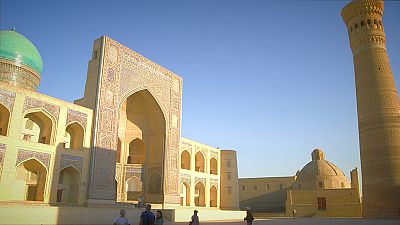 Our Postcard this week comes to you from the heart of the ancient Uzbek city of Bukhara.

The Poi-Kalyan complex has become the iconic image of the city, with its masterpieces of Islamic architecture that date back hundreds of years.

Euronews’ Seamus Kearney reported from atop a tall tower: “And it’s this monument, called the great minaret, that dominates the Bukhara skyline.

“It’s part of the mosque, but in the old days it was also used as a watchtower, standing at a grand height of about 47 metres.”

The minaret is one of the oldest monuments in Central Asia and Poi Kalyan means “at the foot of the great”.

Zarina Rakhimova, a Bukhara guide, told Postcards: “Poi-Kalyan consists of three main monuments: a minaret, a madrassah and a mosque.

“They were all built between the 12th and the 16th centuries.”

And inside the complex are courtyards with perfect examples of mosaics and other decorative artwork.