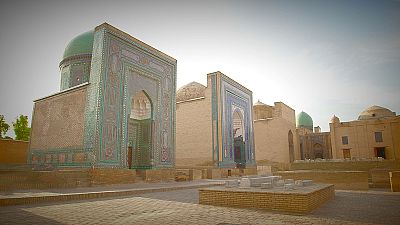 Our Postcard from Uzbekistan this week comes from one of the most unique monuments in Samarkand.

The Shakhi Zinda memorial complex is a stunning collection of ancient tombs.

The name translates as “the living king” and refers to the legend that a cousin of the Prophet Muhammed was buried here.

Euronews’ Seamus Kearney reported: “The architecture here is unique in the way that the various mosques and mausoleums of royals and nobles were built on different levels, added one by one over almost nine centuries.”

Guide Abror Rahimov told Postcards: “There are 11 mausoleums from the 14th and 15th centuries and three mosques, one of which dates back to the 11th century.

“In total there are more than 40 Islamic architectural monuments in Shakhi Zinda.”

This is also where the late Uzbek President Islam Karimov was laid to rest at the beginning of September.

The site is revered as sacred by local people, but it has also become an important religious site for pilgrims who come from far and wide.