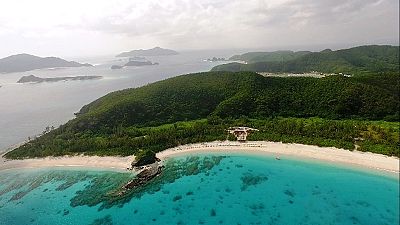 When I heard that some of the southern islands of Japan have some of the world’s best beaches, with white sand and clear turquoise water, I thought it was probably an exaggeration – until I actually set foot on one of those beaches in Okinawa to film an episode of Postcards for euronews. I can tell you that Furuzamami on Zamami Island is one of the most tantalising beaches I have ever seen.

Okinawa is a chain of some 160 islands in the south-west of Japan. There are regular flights to Okinawa’s main city of Naha from Tokyo and other parts of Japan; and Taipei, Shanghai and Seoul, for example, are just two hours away by plane.

The island we visited for our series of Postcards, Zamami, is less than an hour from Naha by fast-ferry and is part of the Kerama Islands and the Kerama-Shoto National Park.

Okinawa has a subtropical climate with mild temperatures all year round and the swimming season on Zamami is from April to late October.

Diving has become hugely popular, with more than 60 percent of Japan’s corals waiting to be explored here.

Scuba diving and snorkeling with expert guides are available in numerous locations.

If you are lucky enough you may come across one of the beauties of the sea that can be found here (the following four photos are courtesy of Zamami Village).

And outside of the beach-going season whale-watching is possible, as humpbacks put on a spectacular show as they return to the area to breed in warm waters.

Other activities on the beach include kayaking, hiking, nordic walking, fishing, camping and stand-up paddle boarding.

Away from the beach people can also check out other aspects of the island’s nature, including flowers such as the hibiscus.

There are also lilies and the beautiful Kerama Azalia (photos courtesy of Zamami Village).

Visitors may also be lucky enough to see a Kerama deer (photo courtesy of Zamami Village) .

A trip around the island is also very much worthwhile, with a visit to the Zamami Village and surrounding lookout points. There are various types of accommodation on the island.

What is certain about Zamami is that visitors, like myself, will never forget the vivid, intense colours of the sea, the friendly people and the authenticity.

Postcards from Okinawa: The wonders of Zamami