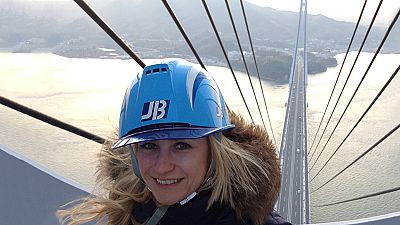 Our adventure of Japan Life started in Naoshima. After 30 hours of travel we arrived at the “Island of Art” late at night and I was really longing to see what it would look like in daylight. Only a few decades ago it was a sleepy island where there was not much to do. But then everything changed when the Benesse Holding decided to give their private collection a space.

I was lucky to stay at their hotel, which is actually right in the museum. The extraordinary thing was that we could visit the museum even by night. Still with jetlag in my legs, I couldn’t sleep and took a stroll after dinner through the Benesse museum; it had such a unique atmosphere.

I was looking at these amazing contemporary masterpieces on my own, nobody was watching me. Back at the hotel I had the chance to appreciate more art up close as every room has masterpieces on the walls. I slept under two paintings of Keith Haring ‘Free South Africa, Untitled’.

One of the highlights was the visit to the Chichu museum which was created in 2004 by the acclaimed architect Tadao Ando, who has constructed seven of the island’s buildings. There are three artists showcased in the museum, which was built only for these pieces and not the other way around, as it is usually the case.

The museum is mainly located underground and only natural light is used. One of the masterpieces is Claude Monet’s ‘Water Lilies’ series. It is hard to believe that the paintings are only lit by natural light and it changes during the day, just as it was in Monet’s time. Another stunning installation is the one of Walter De Maria. Wherever you look on the island you’re surrounded by art. Installations and sculptures nestle around. Another interesting part is the Art House Project where artists used abandoned buildings and turned them into pieces of art.

Our adventure continued in the Seto Inland Sea as headed southwards to film the second part of the story: The Shimanami Kaido bicycle route is a more than 60-kilometer-long road and bridge network connecting six islands. Again the weather was on our side and the view of these small islands dotted around us was breathtaking.

For our journey we filmed six cyclists from the Onomichi Cycling Association and, we had great fun with them. My cameraman was sitting on a motorcycle filming these guys and it felt a little bit like being in the ‘Tour de France’.

The most stunning impression of this day were the impressive bridges and we got the permission to get to the top of one of the most beautiful ones: The Tatara bridge, with 890 meters one of the longest cable-stayed bridge in the world.

Donning hardhats we were taken into the interior of one of the pillars, which had an elevator inside. It took five minutes to get to the top. It was quite scary and once we opened the door, the wind was blowing in our faces and the view was simply breathtaking! I was 226 meters high – what a memorable experience!

We continued our journey towards the south and visited one of Japan’s three best views. It is the Itsukushima shrine on the island of Miyajima. The beautiful Torii Gate was glowing in the sunshine and seemed to be floating at high tide. The present shrine dates from the 12th century and we met a fascinating Shinto Priest who gave us an insight into the traditions of Shintoism.

Art, nature and tradition in perfect balance in the Seto Inland Sea