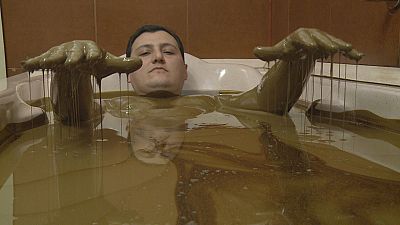 The land of Azerbaijan is rich in wonders, among them the soothing oils of Naftalan. Its benefits can be enjoyed at resorts around the city and people have going there to bathe in the oil since the time of the caravans.

Naftalan is a rare type of non-combustible oil. Local doctors prescribe it to treat skin diseases, back problems, rheumatism, arthritis and anxiety. Each warm bath is limited to 10 minutes, just long enough to allow the oil to be absorbed by the skin.

“Naftalan is a very rich in resin petroleum,” explained Hurshudhanum Namazalieva, the chief medical officer at the Chinar Hotel resort.

“It doesn’t contain any paraffin, or any light elements, such as gasoline. It goes directly into the blood, which stabilises killer cells. They are stimulated by the Naftalan molecules and this improves blood circulation and provides nutrition to any unhealthy organs.”

Some patients claim their chronic diseases were cured. Bathing in the warm oil is like swimming in hot chocolate, they say.

“I have a spinal disc hernia and I had severe pain,” said resort visitor Elena Chelnakova. “After just four or five baths, I felt so much better. I didn’t expect such a fast improvement.”

The first resorts opened in 1929 and were popular among the Soviet elite. However, the healing capacities of Naftalan were discovered much earlier. In the 13th century, Marco Polo described a local oil used to treat skin problems.

The moment of discovery is the subject of legend, according to Musammeddin Gulmaliev, adviser to the mayor of Naftalan: “Once a caravan passed here, and one man decided to get rid of his sick camel and threw him it into an oil pool. On the way back, he found his camel not just alive, but totally healed.”

It is also said the ancient caravan travellers knew of another Azeri natural cure – volcano mud. The land of fire has more than 300 mud volcanoes, more than any other country in the world. They all have different shapes, names and characters. One of the most picturesque, Dashgil, is in Gobustan.

Adil Aliev, the head of the Mud Volcano Department at Azerbaijan’s Institute of Geology, told euronews the mud spurts up from a depth of up to 12km: “This mud is rich in various curative elements and minerals; more than half of the periodic table of elements can be found in volcano mud. That’s why it’s widely used in medicine.”

Every volcano has its own unique cocktail of mud components. The names of the volcanoes that provide the mud for the creams and masks and the other ingredients are kept strictly secret by the manufacturers.

The volcano mud is a source of energy for marathon runner Artem Alyev. He lives in Baku but comes to Gobustan all year round to train on the rugged terrain and bathe in the mud. Gas in the mud makes it buoyant and the bather feels like they are floating in space.

At a chilly but invigorating two degrees Celsius, Artem says the mud prevents him from getting sick: “I feel the beauty of Azerbaijan’s nature. I feel light and wonderfully flexible, and at the same time I feel an incredible freshness, like nowhere else on Earth.”

Our reporter Galina Polonskaya finished her odyssey around Azerbaijan at the crater of one of the biggest mud volcanoes in the country. “But there’s so much more we could show you,” she said. “If you want to know more take a look at my blog on the euronews website.