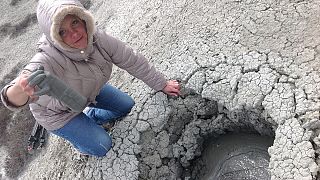 Our crew discovered one of the most cosy and unusual ways of staying in good shape – the naftalan oil hot baths. Unfortunately I could not try it myself because of the lack of time. In order to get the doctor’s permission a patient should spend one day to pass all kinds of medical tests. Doctors need to be sure that there are no complications of any chronic disease. There are some cases when naftalan baths are prohibited, when a woman is pregnant, for example.

I heard lots of miraculous stories from patients about the magical effect of Naftalan oil. One lady told me that she came here three years in a row and her skin disease disappeared for thirty years. Another woman told me that she could barely walk and just after several baths she is back on her feet. Another proof that this oil really works – hundreds of letters from a museum of crutches. Every crutch had a tag with name and a year written on it. “Vasily Fyodorov, 1981” means that this man back in 1981 came here with the help of crutches and did not need them anymore while leaving.

We also took a look at the place where naftalan is being collected. This rare oil is found at the depth of 700 meters and comes to the surface mixed with water. It is collected in cisterns, then in a while water sinks to the bottom and oil on top. Except for this, naftalan goes in the baths as it is – without any purification or modification.

Our next discovery comes from a greater depth. The roots of mud volcanos are spreading from the very heart of Earth to its surface. We were very fortunate to meet a man who knows everything about mud volcanos . Adil Alyev studies them already forty years and he is considered to be one of the most prominent specialists in this topic. He heads the Mud volcano department in the Volcanology Institute of Azerbaijan. Under his guidance the Institute created the first World Atlas of mud volcanos. This book will soon be published n Italy.

The research of mud volcanos is closely linked with the oil industry. In the past scientists considered that mud volcanos were destroying the hydro-carbon deposits. But in 1933 a huge oil-gusher was discovered within the Lock-Batan mud volcano. The output capacity measured 20 thousand tons of oil per day. Nowadays, the mud volcano’s deepest roots are used in oil research.

By the way, Adil was the first one who managed to take a picture of an awaken mud volcano. It was Lock-Batan. In Sovet times Adil studied the health aspects of volcano mud. He discovered that the components of the mud in various volcanos were different, and he created a so-called healing mud volcano Map. It indicated which mud should be used for a certain diseases.

Nowadays, mud from one of the volcanos is being used by Gazelli group to create cosmetic products for a skin. The specialists from this company claim that they developed even a better formula on the base of this mud. The factory looks like a research centre, we had to wear special gowns and hats to film inside. Of course I rushed to try one of the masks on my face and it felt marvelous. After a long journey my skin was cleaned and got a special inside shine.

Guess why I did not jump in the mud volcano like our hero Artyom? We were filming in the beginning of April. The weather was not really nice with us, the day before the filming it was snowing and we were even obliged to postpone the filming of our report. The day when we filmed the temperature of mud was around 2C. Artyom regularly takes ice baths and runs barefeet on the snow. Even Artyom admitted that he has never felt this kind of cold, saying that the day of the filming he really felt the cold of the bottom of the Earth. I wore a winter coat in between all of my stand ups and trust me, the cold was only the first challenge on our way.

The next one was wind; a kind of wind which you could imagine while reading the Wizard of Oz. This wind attacked us the very last day of the filming when we were heading towards the volcano Goturdagh. It is located high in the mountains and the road itself was quite a challenge. Sometimes there was no road at all, we were just going through the hills. When we reached our goal I thought that my stand up idea was gone with the wind. We could not talk, we could barely walk.

But lucky we were!!! The volcano was located in a huge hole, so we were almost hidden from the wind. Still we had to make a dozen of shots before I made it, without my hair in my mouth and breathing normally. It takes only 20 seconds on screen but it took us hours to get this shot. A paradox, but that kind of situations make our journeys really unforgettable.