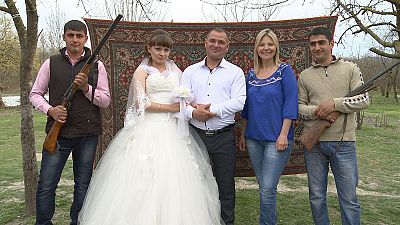 The Azeri village of Nij is home to descendants of people who lived long ago in Caucasian Albania. The Udis are one of the most ancient peoples of the Caucasus. They have preserved their traditions and language and have an amazing history.

The Udi nation was first described in the 5th century BC by Herodotus. Today there are just several thousand Udis spread around the world, and some 4,000 live in Nij. The village is not far from the capital of the ancient Caucasian Albania kingdom (which has no connection to present-day Albania). Locals believe this land has belonged to the Udis forever.

“There were 26 tribes in the Albanian state. The Udi tribe was one of the most powerful, with their faith, their Bible, their language and script writing,” said Oleg Danakiri, Director of the Udi Cultural Centre.

Christianity was the state religion in Caucasian Albania. The Udis kept their faith even through Soviet times when there was no place of worship in town. This ancient church was restored only in 2007.

“Udis are a very unusual people.” says Robert Mobili, a leader of the Udi Christian community.

“Their language is a part of a group of rare Caucasian languages. We belong to the eastern branch of Christianity. Our goal is to restore the independent status of the Albanian church in Azerbaijan.”

Сhristian symbols have always been a part of everyday life of the Udi nation. The costumes of traditional musicians have not changed in centuries and also tell the story of one faith.

Local musician Karlen Shirvari explained with the help of a colleague’s cloak: “Here you can see the ancient cross of Caucasian Albania, and on the back there is something like a sun with eight arrows. It symbolises the pilgrimage to Israel. And it means the person who wears this was baptised there.”

This appreciation of tradition also applies to Udi cuisine. Only when the dough is blessed can the cooking of the most beloved of Udi delicacies, Afar, begin. The main ingredient is nettle. This wild, stinging plant is rich in vitamin C. In winters past it was a source of energy. A book of 100 rare Udi recipes will soon be published by the Nij community.

Local woman Rita Danakiri explained how the recipes have been handed down through the generations: “I learned how to cook it from my mother. She in turn was taught by my grandmother. Now, I teach my daughter. Afar is not an easy thing to cook. This dish has existed as long as we Udi people have lived on Earth, and it will always be a part of our life.”

Udi people speak Azeri, but mainly use their own rare language. Their ancient alphabet has been replaced by Latin letters which are easier for children to learn. New school books are published every year and online dictionaries in Udi-English and Udi-Azeri are in the pipeline.

Grigori Meshari composed a poem in Udi as a birthday present for his mother. The poet says his mother tongue is his inspiration. He started to write poems in Udi when he was a little boy. He says it is the language of God: “My mother tongue is my muse. Its sounds are so perfect. It allows me to put the beauty of our world in words.”

When we arrived in Nij the village was preparing for one couple’s wedding day. The old rules are followed strictly, to the letter, with village girls all helping the bride prepare.

Breaking bread over the bride’s head is a statement saying the bride is now keeper of the family hearth. At the same time, by tradition the groom is shaved by a professional barber, who receives money from the guests.

Aleksandr Kankalov, the groom, explained the significance: “When a boy is born first he is a baby, after he becomes a child, then a teenager. But the only way to become a man is to get married, and this shaving symbolises a step into the adult life; it symbolises his becoming a man.”

There is another ancient, if slightly bizarre, ritual which dates back to the times when the men of the village hunted for food. It involves blasting a shotun at an onion tied high up in a tree.

The shooter who manages to hit the almost invisible onion gets the honour of passing the gun to the groom.

Our reporter Galina Polonskaya concluded“From Nij our journey takes us to Gobustan and the “fire mountains”. That’s how people refer to the famous mud volcanoes. We’ll take a look at their reputed magical powers in the next edition of Azeri life.”