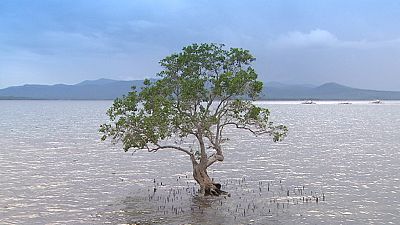 Palawan is known as the green jewel of the Philippines. Here the biodiversity is richer than anywhere else in the country. The Filipinos call it their last unexplored paradise. In this edition of Philippine Life we’ll discover the treasures of Palawan – among them, a mystic underground river.

Our trip starts at the gateway to this unique island: Puerto Princesa, known as the “city in the forest”.

The island is 450 kilometres long and borders the South China Sea in the northwest and the Sulu Sea in the southeast.

Over half of Palawan’s surface is still covered by ancient forests. It was mostly spared the devastation wreaked by Typhoon Yolanda last November. One of the island’s treasures is the Puerto Princesa Subterranean River National Park. There are mangroves as far as the eye can see.

A well known local is Lady Mangrove, Aida Moyano, who has composed a song dedicated to the forests and its visitors. Moyano has lived here for many years and puts her heart and soul into protecting the mangroves. These intertidal forests are among the most productive and complex ecosystems on Earth.

“Without mangroves there is no balance of the ecosystem. Animals, mangroves, people – all around is balanced like that. Animal life needs mangroves for shelter, of course. This is a sanctuary of wildlife. And the food of the animals is here,” she said.

The dense foliage is home to a variety of exotic species. One of the most intriguing is the gold-ringed cat snake. It is known as the master of the mangroves. By day it sleeps, but in the night it wakes and hunts for prey.

“The yellow striped snake is mostly found along the riverbanks. The snake will stay here because it eats small fish,” explained Aida Moyano.

A boat ride away lies a place full of history carved out by nature: the world’s longest navigable underground river. It is a UNESCO World Heritage Site and now one of the ‘New Seven Wonders of Nature’.

Over 8.2 kilometres long, the breathtaking river winds its way through a fascinating cave system and flows directly into the South China Sea.

“Very common are bats and swiftlets but in this cathedral, right behind us we found some creepy crawling creature, a big spider, tarantula, we have seen snakes and some scorpions,” explained Eduardo Nitor who is a guide in the area.

The ceilings of the caves are teeming with life. Around 40,000 bats live in perfect harmony with thousands of so-called Salanganes. Amazingly, these swallows have adapted to life in the dark – unique in the bird kingdom.

Ian C Bacuel, who is a recreations and welfare services officer, explained how the birds find their way home.

“They use echo-location, like whales, to reach their nests. Those sounds that they make: the wave bounces and then they find their way to the destination inside and outside the cave.”

Life inside the caves date back millions of years. Three years ago, Italian scientists made a stunning discovery. On the limestone wall they found the fossil of a Sea Cow/Sirenia which is estimated to be 20 million years old.

The underground river is a place full of imagination and mystery.

“Going inside the underground river is like going into another world, another dimension which you never experienced before, and then coming out is like going back to your own world, which is the reality,” concluded Ian C Bacuel.