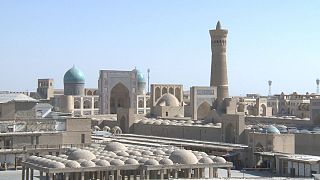 Bukhara is the destination of this edition of Uzbek Life. Euronews’ intrepid adventurer Galina Polonskaya took a camel ride around some of the ancient city’s sites to get a flavour of its charms. e.

“Bukhara is more than 2,500 years old. In the Silk Road days long caravans came here from all over the known world, the legends of the magic oasis hidden between two deserts spread from India to China, and nowadays Bukhara can still win the heart of the most seasoned traveller.” Galina said, gripping tightly to the reins.

Bukhara is a city of wonders, and its merchants are enchanting. They welcome guests in exactly the same place that their forefathers did – under the ancient trading domes and in the surrounding streets. They have inherited the gift of a an outstanding capacity for foreign languages.

“You can still sense Bukhara’s atmosphere and its colours, when this ancient city was a big trading centre on the Silk Road”, said tour guide Mubashira Bahshilova. “Even today under those domes they still sell what was brought here hundreds of years ago, as well as the typical locally handmade goods.”

The Kalyan minaret is one of Bukhara’s most iconic symbols. For a long time it was the highest in Central Asia. It was also a lighthouse and at night torches would burn, lighting the way for caravans approaching the town.

Bukhara’s historic centre is on UNESCO’s World Heritage List. One highlight is the mausoleum of the Samanid dynasty, built in the 10th century. It changes colour with the weather. Experts say the secret is in the special brickwork.

Mubashira Bahshilova explains: “The architect who created this mausoleum had 18 ways of laying the bricks. If you take a close look you’ll see each surface has 10 windows. Every window has its own decoration. So the windows on each front are different”.

The great polymath Avicenne was born in a village close to Bukhara, when it was still the capital of the Samanids. The author of “The Canon of Medicine” often came to the Emir’s residence, the Ark fortress, which has been destroyed and rebuilt repeatedly throughout history.

Galina Polonskaya says: “When Avicenne was 17 years old he healed an emir who was thought to be dying. The doctor didn’t want to be rewarded with gold. Instead, he asked for permanent access to the fortress’s library and its treasures.

According to legend Avicenne created some of the best local recipes, and that is another enticing aspect of local hospitality. In the Silk Road times more than 60 caravan hotels existed Bukhara, each catering for different languages.

Bukhara resident Doston Rajabov says visitors can expect the warmest of welcomes: “A guest is like our father, like it was in ancient times and will always be. We receive guests as we would our own father”.

Guests who come to Bukhara from all over the world can feel the rhythms of the past. Centuries ago foreign dancers would come here with the caravans to perform. The costumes haven’t changed much. Some dresses are a work of art, dating back to the 2nd century BC.

Bakshillo Djumaev is from a dynasty of master embroiderers. His threads consist of silk and real gold. It can take up to six months to make the traditional gown. The creativity comes from the past, present and the future of Bukhara.

This is the mausoleum of the famous sufi Naqshband, who was an artisan himself and said the hand should be filled with work, and the heart with God. Today Bukhara artisans repeat this phrase and consider Naqshbandi as their patron.

Ustoshokir Kamalov is a 7th generation blacksmith. He knows all the secrets of forging the reputedly everlasting Bukhara knifes – a knowledge he got from his father and passed on to his son. Ustoshokir hopes the heart of his ancient smithy will beat forever: “There is music in the work of a blacksmith. It’s the music of a heartbeat. Tuk tuk, tuk tuk.”

Not only have the secrets of ancient skills and crafts been passed on through the generations, but also the secrets of cooking one signature dish. It was offered to guests in the Silk Road days. In our next story we will show you how to cook the famous Uzbek ‘plov’.