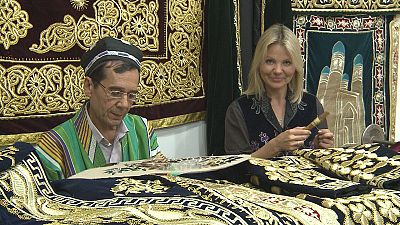 From the very first moment when I arrived, Bukhara put a spell on me. I fell in love with its narrow streets, unique buildings and friendly merchants. By the way, most of the merchants are also craftsmen, so they actually sell what they make with their hands. It is impossible to find here «a made in China» label. Everything is made in Bukhara. The merchants also speak foreign languages, and in fact some believe that the local people inherited this linguistic ability from the times when Bukhara was an international melting pot. In history, the Silk Road had more than 60 caravan `hotels’ built in the city, and each one welcomed guests from a specific linguistic region. That’s how merchants avoided being lost in translation.

The trading stalls under the domes where one can still buy famous Bukhara handmade carpets, or other unique goods representing the region’s past, were divided onto themes. The « domes » of hat sellers, for example, was a separate place where people could go to search for a nice local hat. There was a separate stall where merchants could exchange the currency.

Bukhara has plenty of legends and some of them are dedicated to the mausoleum of Ismail Samani and the Kalyan Minaret, which I showed in my story. Legend says that those ancient and unique structures have been preserved for such a long time thanks to adding camel milk and egg-yolk into the cement.

We were allowed to climb to the top of this minaret. It was quite a climb, I would say. When I was looking at Bukhara from this height I could not stop thinking about another legend I heard. In the past this minaret used to be also a place of executions. Those who were condemned to death had to climb to the top and jump. So, one of the legends says that one young wife who was caught cheating on her husband was condemned to be executed like this. But the ruler decided to fulfill her last wish. She wanted to wear her favourite clothes. She put on everything she had saying that she loved all of her clothes and it helped her to stay alive because the clothes cushioned her fall.

With these thoughts, still feeling dizzy, I went to one of the heroes of our story who in himself represented the past, present and future of Bukhara. The blacksmith Ustokoshir Kamalov has preserved this art even though during Soviet times he had to work at another job. So Ustokoshir taught Russian in a school. But as soon as he had the freedom, he opened his workshop and even created a museum. A gold weaver Bahshillo also had to work in a dreary factory in the past, but now his art is known all over the world. He is a star guest at different international exhibitions. These people cannot imagine their lives without their art, and believe that thanks to them Bukhara will never forget its wonderful past. I tried to touch this past myself with a blacksmith hammer, well, I have to confess that the master would never take me as an apprentice. By the way the youngsters are willing to learn the old professions, even though they seem to be very difficult and demand much patience.

Another unique art form preserved from ancient times – the art of wooden carving. We will explore this in Khiva, which is another unique city of Uzbekistan that was another major centre on the Silk Road.