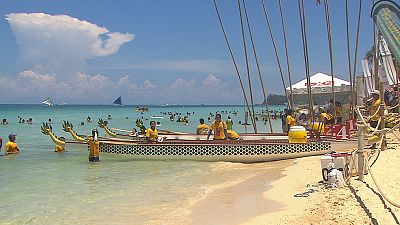 The Philippines is an archipelago made up of more than 7000 islands – the most popular is Boracay. This small island has become a paradise for holidaymakers and sports-lovers. In this second edition of our “Philippine Life” series, we discover this windsurfing and kitesurfing mecca and experience the famous Dragon Boat Festival.

It’s one of the most exciting times of year in Boracay. Hundreds of paddlers from all over the world are here to take part in the International Dragon Boat Festival. It’s the seventh time the island is hosting the event. The teams compete for glory in the crystal clear waters at White Beach.

“It’s so intense with all the atmosphere. Listen: everybody is cheering for you,” says one participant.

“The atmosphere is really great,” says another. “We enjoy competing here. There are lots of teams from all over the world.”

Strength and endurance are essential if you want to win, but teamwork remains the key ingredient according to one of the event’s organisers, Tootsie Ronnholm. She picks up the paddle herself to take part in the competition.

“First of all, you need discipline. If you want to be a competitive paddler you need to train every day. You need team spirit,” Tootise tells us.

The teams have been preparing for this moment for months. Among them is the Bugsay Boracay team. Its 40 members train five times a week. They come from all over the world, including Sweden, France, Russia, and of course the Philippines. Simone Bartmann is one them.

“The closer you get to the water, the more excited you get. But the excitement reaches its peak just before the race, when we head for the starting line. You have to paddle backwards and forwards to stay in the right position. That’s the moment when your heart really starts to race,” says Simone.

The hard work has paid off. Simone’s team wins several medals. It’s time for celebrating for team members, who have gone through thick and thin together.

“We are more like a family,” Simone tells us. “We stick together and that makes life on Boracay even more beautiful.”

The 46-year old, who’s originally from Hamburg, moved to Boracay 12 years ago. Back then, the island was a more quiet place than today. Located just 300 kilometres south of Manila, Boracay is only 10 kilometres square. Until the Seventies, the island was home to just a few small fishing villages. Then, backpackers discovered its beauty and it soon became one of the country’s top tourist destinations.

But Boracay is more than just a holiday paradise. It is also one of the best places for wind and kitesurfing.

The best spot is Bulabog Beach with its shallow waters. The best time is between November and April, when the wind conditions are most favourable.

Simone fell in love with the spot and opened up a kite and windsurfing school there. Kitesurfing, in particular, may look daunting, but it’s not as difficult as it seems, she says.

“Even if you struggle for the first four or five days, it is a sport that you can pick up relatively easily. Kitesurfing appeals to many because of its unlimited possibilities to burn off energy. You can just glide along or jump and do all sorts of tricks,” says Simone.

Today, Bulabog hosts a number of world events including the Kiteboard Tour Asia.

It is kitesurfing instructor Santi Borràs’ first season in Boracay and he is blown away:

“It’s exciting. It is the combination of water, wind, different elements and just moving with it and gliding. I call it meditation because it’s just you with the wind and nothing else. And it’s just perfect, it’s beautiful,” he says.

Besides its exotic beaches and exciting water sports, the Philippines is also home to an underwater paradise, considered one of the most beautiful in the world. In the next edition of “Philippine Life”, we will discover the bay of Donsol on the island of Luzon, and dive beneath the waves in search of the biggest fish in the world: the giant whale shark.