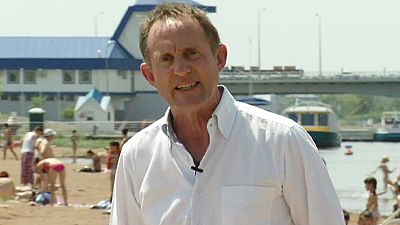 Astana is a city of contrasts. There are few shades of grey in the capital of Kazakhstan which is determined to make its mark in Asia and beyond. First off come and swelter in the sunshine in June and July and bring your swimming costume to cool off on the beach. A beach in the world’s largest land-locked country. You’ll find it on the banks of the river Yessil which runs through the city.

If you prefer a winter break, then bundle up well for temperatures plummet and Astana becomes, officially the second coldest capital in the world.

The impressive architecture which has a marble glow about it is perhaps testament to the rapidly growing economy. Figures fired at the visitor include the fact the gross city product grew almost 90 fold in the last 14 years.

Impressive but it hasn’t filtered down to the old captain who runs cruises on the river. His boat simply putted to halt when we went on a sightseeing trip. Endless tugging on an old piece of string which disappeared somewhere into the engine failed to get a cough out of it. The trip was abandoned.

There is a real spring in the step of the young people who, like in any modern capital love to go clubbing. They earn a lot less than their counterparts in Europe yet the prices are similar to Europe.

A local DJ stressed the capital is still growing, its too early to start talking about a culture in the city. Among the contrasts Astana is finding its true identity.