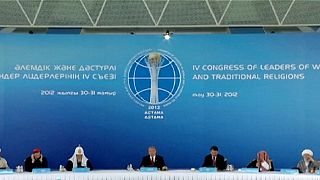 On the final two day of May thousands of people travelled to the city of Astana. The capital of Kazakhstan became the focus for many in the religious world. Generations united with their spiritual leaders, sharing a common theme, one vision and one global hope.

One participant said: “We are looking for the further development of peace and harmony in the world.”
The palace of peace and harmony in the shape of a pyramid is hosting the fourth congress of leaders of world and traditional religions. Its modern structure is in sharp contrast to the Russian orthodox church in the city where the patriarch led a service before the congress opened.

Over 360 delegates, with their leaders from 47 countries came to Astana where the theme was, ‘Peace and concord as the choice of mankind.’ All were in agreement that spirituality can be a prime mechanism in solving the world’s problems.

Yona Metzger the Chief Rabbi of Israel, was at the gathering, he said: “My dream is to build something, like the United Nations in New York for diplomats, it will be united for religious people, religious leaders for all the nations, all the countries even between countries that do not have diplomatic relations.”

How could such a multi-faith organisation help solve the the world’s conflicts however? Especially since many of them have raged in the name of religion? The Supreme Mufti of Khazakhstan, Absattar Hajji Derbisali says that all religions have the same peaceful goal: “All religious leaders call out for peace of mind and accordance and this is one of the goals of this Congress,” he said.

One of the topics the delegates discussed was how they can help people struggling with the debt crisis, as the British Bishop of Bradford, The Rt Revd Nick Baines explained: “With the situation in the world at the moment with the economic crisis… For a lot of people it begs the question ‘what is it all about?Why are we bothering about all of this? What is life all about? When we talk about values what are they rooted in?’ So you have the sheer practicality of how do we get bread for tomorrow but also those more existential questions and I think those are the sort of things that we are trying to identify here.”

The proceedings were opened by the President of Kazakhstan, Nursultan Nazarbayev. He spoke of the great example Kazakhstan sets in the world.

“Kazakhstan sets an example firstly because we have 140 nations living here from 46 different religions, in Astana you see synagogues, temples, churches etc. People can freely attend to their religious institutions and freely express their spiritual values. Secondly Kazakhstan showed an example to the world with nuclear disarmament.”

It was on the vast central Asian steppe that the seeds of the spirit of Kazakhstan were first sown in the late 1930s, when the then Russian dictator Joseph Stalin quite literally dumped millions of people there: Ethnic Jews, Chechens… Those that survived owe their lives to the people of Kazakhstan who took them in, and gave them hospitality underlining the fact that differences can unite and not divide.

At the end of the event all in attendance enjoyed a glittering concert no doubt with their minds fixed on the future. While the people of Astana like to enjoy the moment, something we will see more of when we go for a night out in the city in the next edition of Kazakh Life.