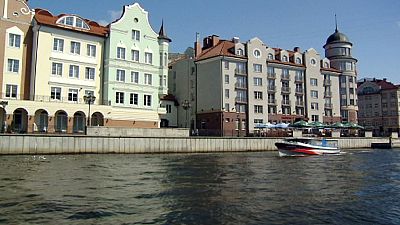 For this edition of Russian Life, euronews travels to the Kaliningrad exclave. Isolated from the rest of the country, it is the smallest, youngest and greenest of Russia’s territories.

Its convenient location and nice weather make the bicycle a popular way to get around the city.

“We’re 30 minutes from the sea, the place is environmentally friendly, with clean air, lots of green trees and interesting terrain. And everything in Kalingrad is close by – you can cross the whole city on foot in around an hour and a half.”

Not much is left of the original German enclave of Koenigsberg, as this region was known before it was passed to the Soviet Union at the end of the Second World War. Allied air raids ruined the historic centre before the city was taken by the Soviet army.

One of the few surviving buildings is the medieval cathedral. Daily concerts on its recently restored pipe organ bring in visitors from all over Russia and the rest of the world.

“Kaliningrad is special, it’s unlike other places in Russia, mostly because Europe is very close. So all the European tourists who come here bring strong cultural influences that locals observe and absorb into their daily lives.”

This organic gemstone is made of fossilised pine resin. It varies widely in size, colour and transparency. Jewellers say amber is very different from other stones: originating from living plants, it feels like it has life and sunlight preserved within it.

Alexander Yuritsin is an amber jeweller and was happy to talk about its qualities:

“Amber is good for your health. If you cut granite, you have to wear a protective mask and goggles. But when you work with amber, you don’t have to take these precautions – it makes you sturdy, young and handsome.. Like me, you see!”

A short trip away from Kaliningrad are Russia’s Baltic sea resorts. Pieces of amber torn from the sea floor are sometimes cast by the waves on the white sand beaches, where they can be collected by hand, but most of the raw amber comes from the vast quarry just outside the town of Yantarny.

Our guide Elena Platunova told us:

“Behind me you can see the world’s only strip-mined natural deposit of amber. The quarry goes 50 meters deep, and the industrial extraction here, on the Sambia peninsula in the Baltic Sea, produces more than 90% of the global supply of amber.”

Nearby an old quarry, decommissioned in the 1970s, has flooded and been transformed into the Amber Lake – a hot spot for scuba divers. This 30 metre deep lake has served as a film set for many action movies: plane fuselages, ammunition cases and other props are scattered all over the lake bed.

We are now almost at the end of our trip around Russia. In our last two editions, we will conclude our journey around the country with a look a the capital city, Moscow. That’s next week in Russian Life.