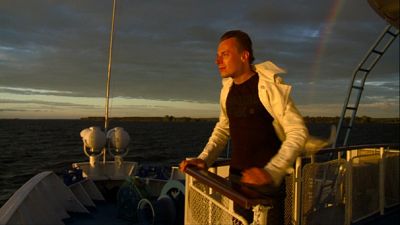 The Volga has always been Russia’s national river – a real emblem of the country’s might and greatness. Most of Russia’s main cities and the oldest existing Russian settlements are either located on the Volga’s shores or like Moscow connected to the river by an elaborate system of artificial canals and water storage reservoirs.

Europe’s longest river defines the whole European part of Russia, traditionally serving as the main artery of trade and transportation, as well as the natural boundary between peoples of various cultures inhabiting these lands.

That makes the Volga a favorite attraction both for Russian tourists and foreigners coming to take a cruise along its shores. Fleets of mostly Soviet-built motor ships, recently renovated, circulate between Moscow and other main cities of the Volga basin. The journey, which takes several days, allows passengers to breath fresh forest air while getting a tan and enjoying the magnificent views of towns and villages with elegant golden domes of Orthodox Christian cathedrals adorning the skyline -like shining beacons in broad daylight.

On the three-deck motor ship that left Moscow for Samara I met Ludmila, a software specialist, who has taken the same trip down the Volga with her husband every summer for the last ten years. I wondered why wouldn’t rather see other places in Russia or abroad, and they couldn’t really find a simple answer. For them, it’s about staying in touch with their native region, keeping the inner ties with its nature and its history.

For the old towns scattered along the riverbanks, the inflow of tourists is a vital source of income and employment: plenty of private apartments have been turned into guests accommodation. There is an abundance of souvenirs, as well as museums dedicated to everyone and everything ranging from various historical figures to vodka or traditional Russian felt boots.

One town – Myshkin – found its amusing particularity in its name meaning “little mouse” in Russian. Tourists are met by human size mice dancing on the pier, who guide them into “the world’s only museum of mice” or the shops selling all kinds of furry-eared figurines.

The city of Yaroslavl celebrated its 1000th anniversary last year and still looks neat and polished, with its unique cityscape embellished with a new prominent white stone cathedral. Our ship arrived there on Saturday, so we had a chance to see many newlywed couples celebrating their marriages in a large park at the rivers’ confluence. Families bring children to see the musical fountains dancing to the music of Russian classics.

A voyage on the Volga, meditative and picturesque, carried us away from the restless megalopolis of Moscow, uncovering the quiet beauty of nature in the very core of the Russian soul.