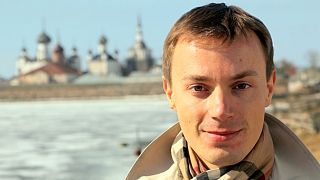 It took nine days in unheated train carriages for the first Soviet prisoners to get from Moscow to Solovki – the infamous forced labour camp on the Solovetsky Islands, a small archipelago isolated from mainland Russia in the cold White Sea.

We are much luckier, only having to take two short plane flights, connecting in Archangel, one of the main cities in the Russian North. The camp ceased to exist at the beginning of World War II. Today the Solovki are slowly recovering their former glory as the spiritual centre of Orthodox Christianity, a kind of national Holy land, the site of pilgrimages for orthodox believers and those interested in Soviet history alike.

The contrast between Christian values of tolerance and forgiveness and the historical realities of this place is striking. Long before the Bolshevik revolution that brought down the Russian monarchy and quickly collapsed into the civil war, totalitarian rule and massive repressions, the sacred monastery castle on the main Solovetsky island was a prison for enemies of the state and the church. Some people were sent to exile in Solovki.

It is a sunny day at the end of April when our small airplane touches down on the iron-paved landing strip right next to Solovetsky Monastery. It is Easter eve, but here, about 160 kilometres from the Arctic Circle, it still feels like the European winter; about zero degrees Celsius, probably not the best time to come to Solovki.

The ice between the six main islands of the archipelago has started to melt, so there are no ways to cross it until end of May. Everybody has left all the islands, except the main one that has the tiny airport; the smaller ones will remain unreachable for several weeks.

Come June, sea navigation will open, bringing to Solovki crowds of tourists and pilgrims from all over Russia, together with people from Finland, Western Europe, the USA and other foreigners attracted by the legendary beauty of this place. Its excursion routes are quite well-designed; they combine boat trips along the monk-made canals with visits to holy places and the sites of Gulag-era mass executions, which are often the same.

The summer months provide the annual revenues for the small local population of less than 1,000, many of them children and the elderly, with almost all working adults employed by the museum. In the low season, life on Solovki slows down. As one local told us, the men spend the winters ice-fishing, drinking, or drinking while ice-fishing, while their wives kill time paying each other visits.

There are no theatres or restaurants in which to spend the long northern nights, and if anybody is unlucky enough to have toothache, they have to fly to Archangel to see a dentist.

The beautiful monastery with its onion-shaped wooden domes, typical of the unique northern Russian architecture, is a dominant landmark of the main island. Most of its churches and other buildings are now being restored, some of them very impressive even for a modern visitor. The site has quite an unusual status of being both a functioning monastery with a brotherhood of about 100 monks and a state museum, with the same person in the dual role of monastery father superior and museum director.

This is an interesting phenomenon in Russia, where the church and museums do not always get along well in their disputes over historical estates and cultural artifacts. However, as one of the museum employees told me, the abbot director is actually very supportive of historical and archaeological research on the archipelago, even more so than some of his secular predecessors.

A permanent exhibition of Gulag-era documents, photos and some recovered work tools has been recently opened in one of the barracks that housed prisoners of the Soviet labour camp, just outside of the monastery walls. There is not much left after the immense political prison was shut down and thoroughly scrapped in 1939. Still, the declassified orders, personal letters and other collected papers reveal the facts of industrialised violence and humiliation that killed or crippled tens of thousands of people, among them the best minds and talents of their generation. Many of them lie buried in unmarked mass graves, yet to be counted and identified.

We left Solovki with mixed feelings of amazement and sadness, hoping to return here sometime in July – when sparkling streams will carry boats through the blooming forests of Russia’s holy land.