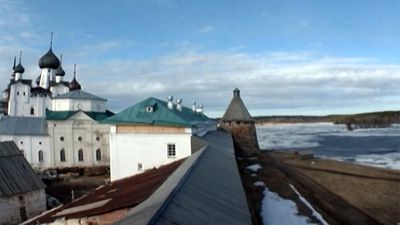 Russia is a land of riddles wrapped in mysteries. Everywhere from its North to South, East to West. Join us in exploring the largest country on Earth in our new series ‘Russian Life’. We begin our journey near the Arctic circle, on the White Sea archipelago of the Solovetsky Islands – also known as Solovki.

This is the holiest site in Russian Christianity, a wonder of medieval architecture and a jewel of nature. How did it become a place of suffering and humiliation for hundreds of thousands?

These islands first became sacred grounds thousands of years ago, when ancient peoples of the North festooned the shores with their mysterious boulder labyrinths.

“Some archaeologists believe that the stone labyrinths were built for magic rituals related to hunting and fishing; others think they signified the mountains of the dead, a resting place for the souls of the deceased,” explained the Deputy Director for Science at the Solovetsky Museum-Reserve Alexander Martynov.

Paganism gave way to Christianity, and in the 15th century Solovki became a domain of the magnificent monastery – a citadel of the Russian Orthodox religion, a military stronghold and the economic, cultural and political centre of the region. The sacred site was believed to be the closest to God’s realm, giving unique power to the prayers of those who stayed on the islands.

“The Russians were always attracted by Solovki, and have always sought to make pilgrimages here. In medieval Russia the belief was that every Russian person had to go to Solovki at least once in their life, and the pilgrimage here pretty much replaced the pilgrimage to the Holy Land,” said Oleg Volkov, the head of the Monastery Heritage Research Department at the Solovetsky Museum-Reserve.

Solovki’s history took a darker turn in the 1920s when the Bolshevik revolution desecrated the monastery, turning its cells and churches into prisoners’ barracks. The rising tide of repression processed up to 350,000 people, criminals along with scientists, artists and thinkers, through the slaughterhouse of forced labour. The whole Soviet GULAG prison system was modelled and tested on Solovki.

“They found it convenient to place inmates on the islands, to keep them in the frigid northern territories. They sent the most dangerous criminals here – those who acted or could potentially act against the State. That could mean anyone at all. Intelligent people understood what was going on in the country, so they became the most dangerous,” said Olga Bochkaryova, the head of the 20th century history department at Solovetsky Museum-Reserve.

Hard labour, disease and mass executions took the lives of 5,000 to 7,000 Solovki prisoners, crippling those lucky enough to serve their complete sentences and make it off the islands alive.

“Here lie hundreds, maybe thousands of inmates. All these birch trees, all these buildings rise over the mass graves,” adds Bochkaryova.

In 1939, the labour camp was shut down and scrapped. Today the complex heritage and natural beauty of Solovetsky Islands provides a livelihood for almost 1,000 local residents, attracting tourists and pilgrims from all over the world.

“Any Russian, just like any other person coming here, can stop for meditation and try to answer the most important question of all: what am I living for, and what do I need to do to make my life right?” said the Superior of the Holy Transfiguration Solovki Monastery Archimandrite Porphyry.

With the historical monastery revival, the Solovki are reverting to their original selves. Still, every Easter celebration here painfully recalls the tragic story of death and resurrection in Russia’s Holy land.

From the northern islands we will move to the southern mountains: for generations the Urals have been Russia’s industrial backbone. Today they are revealing a new identity as a place of ancient heritage and modern recreation. That is in the next episode of ‘Russian Life’.