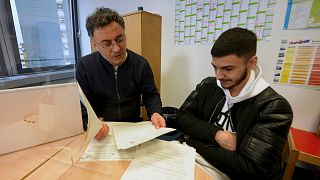 The city of Offenbach, near Germany's major economic hub of Frankfurt on the Main, hosts a large number of migrants who sometimes face challenges to integrate into the labour market and into the local community.

One such family is the Milanovs, who migrated from Bulgaria to Germany 10 years ago.

It’s been a decade of hardships, marked by unstable jobs, homelessness as well as language and cultural barriers. But new EU initiatives on minimum income could help improve the lives of people like the Milanovs.

In the last two years, a publicly funded social safety net has allowed the Milanov family to foresee a brighter future. The EU's minimum income scheme like the one the family benefitted from become even more effective in helping to lift Europe's most vulnerable households out of poverty and into the labour market.

"After I lost my job, I went to see the state and they helped me," said Radostin Milanov who benefits from a German minimum income scheme. "We had no place to stay, no flat. They found us a place to stay, a flat, right away. They found a place for my children at school and supported us. They also explained to us how to live in Germany."

The Milanov family is part of a pilot project, funded by the European Union, called CRIS (Cooperate, Reach out, Integrate Services). It aims to find new ways of addressing the issues faced by the most vulnerable.

"I think the CRIS project is very good," Radostina Milanova told Euronews. "They treat us, my husband and children, well and help us. When I or my children receive letters from the authorities and other institutions and don't understand them, they help us. And they are very respectful to us."

Minimum income schemes across the EU: 'Room for improvement'

But these schemes are facing significant challenges at an EU-wide level. For Serdar Damar, the coordinator of this initiative at the Offenbach municipal job centre, minimum income schemes need to be more personalised and holistic.

"We have more success when the people trust us, when they see that they are not a number, but they see that we care about the whole family, that we take their problems and worries seriously, that we also take their health problems seriously," Damar said. "And that makes them feel taken care of. They feel integrated in Germany, feel accepted. And I think that is the best way to build a common life together with these people and a common future here," he added.

An estimated 95 million people in the EU are at risk of poverty or social exclusion. For the transnational coordinator of the CRIS project, the German minimum income is a good model, although he says there is room for improvement.

"We cover the full cost of housing, and we cover a wage for livelihood which is sufficient but on a very low level. So there always should be an incentive to take up work to earn more money, so that’s the basic principle in Germany as well," said Matthias Schulze-Boeing, CRIS Transnational coordinator.

"There is much room for improvement to integrate those different services: support for young people, for youth, health services, housing services to become more effective and more efficient."

Will the minimum income scheme work in practice?

The European Union has made a recommendation to member states on how to improve their minimum income schemes. Their reforms should focus on coverage and take-up, access to labour markets and services, and individualised support and effective supervision.

But will it be enough to help fight against poverty in the European Union?

Euronews spoke to Bea Cantillon, Professor of social policy at the University of Antwerp to ask her view on minimum income and the way they’re currently applied across the EU.

"I would like to start by saying that the fact that, in the EU all member states have minimum income protections as a last resort safety net for all citizens, is extremely important," she said. "This is for instance not the case in the US and in the past few years and decades, we saw that Member states that were lagging behind, they caught up."

The EU is pushing for a recommendation on minimum income, but a recommendation is non-binding. Asked why the EU is not pushing for a directive or regulation in this matter, Bea Cantillon said: "There have been many initiatives, but I would say that the strongest initiative up till now is the text that we have in this proposal. First of all, you have to settle the minimum wages. Then it becomes possible to think about a directive on minimum income protection. It's also difficult to define what basic needs are in the EU."

The Professor of social policy agreed that the structure of the European Union is a key point to bear in mind when it comes to minimum income schemes because social policy and labour policy are still largely in the hands of member states.

"You cannot think about a European minimum income scheme covering all citizens, all EU citizens in the same way. The differences across countries are much too big in terms of welfare levels, in terms of economic capacity, in terms of social security systems which are extremely different in the different member states."

When asked about projects that seek to have a more holistic approach to minimum income, Bea Cantillon said that she thought this was the way forward.

"That is the reason why the local level, the level of the welfare agencies is so important, because you cannot help huge numbers of minimum income recipients. So important is the fact that minimum income schemes should remain a last resort for a limited number of people. Because if the numbers increase, which has happened, then it becomes increasingly more difficult to implement such a holistic approach."

For the Milanov family, the minimum income scheme is a lifeline and a glimmer of hope for the future.

"I want my children to finish their studies. I want them to become independent. We care about them as parents," Radostina Milanova said.

Crash Course: How will Croatia manage the euro transition?

What is the EU’s plan to end reliance on Russian energy?