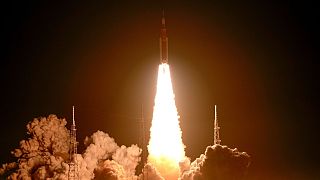 Despite millions of dollars being poured into rocket technology and some of the best minds on our planet being involved in trying to propel these vehicles out of the Earth’s orbit, space launches often seem to go spectacularly wrong.

That was the case this week for the UK first-ever rocket to be launched into space, Virgin Orbit’s LauncherOne, which failed to reach orbit after experiencing an “anomaly” on Monday after taking off from an airport on the Cornish coast.

The disappointment for the crowd gathered at the site can only be compared to that likely felt by the team at Virgin Orbit, who had its ambitions temporarily squashed by the failure.

But anyone keeping an eye on space launches would have hardly been surprised by the British rocket’s failure.

Last year, NASA’s Artemis 1 – an unmanned test mission that left Earth for a series of explorations of the Moon and Mars – twice failed to launch due to a series of technical issues.

First, the initial launch was called off in late August after technicians discovered a series of small hydrogen leaks on the rocket. Five days later, a fuel leak was discovered during tanking. Then a US Space Force radar station went down.

Artemis 1 was finally launched in mid-November, three months behind schedule and after what felt like a long wait – certainly to those who had worked on the project.

But why are space launches so vulnerable to failures? In short, because it turns out that rocket science is actually as hard as we think it is.

While the giant explosion that propelled a rocket off the ground isn’t that complicated an operation, everything that follows, including controlling that explosion, is extremely hard.

“Most of the reasons [for a failure] have to do with combustion,” Vepa said. “You’ll have instability in combustion and basically failure. That can happen quite a lot in combustion engines, rocket engines and so on”.

Things can go wrong with the combustion for various reasons, he explained.

“For example, the space shuttle often fails for very simple reasons – hydraulic system instabilities, hydraulic systems that get completely clogged because of dirt,” he added. “Rocket engines are very complex machines, and the possibilities of failure are manyfold.”

More than half a century into the Space Age, launching rockets is still almost as risky a business as it has ever been. The biggest mistake we can make is thinking that it isn’t.

“People should have good designers to look into possibilities [for failure] and make sure that that won't happen. Unfortunately, people don't quite recognise how things can go wrong. If something can go wrong, it will: Murphy's Law,” Vepa said, laughing.

“Just because millions are poured into it doesn’t mean everything will go right,” aerospace engineer and analyst Karan Mehta told Euronews Next.

“Space is unforgiving and unrelenting – even minute manufacturing errors can cascade into major malfunctions that can cause system-wide failures,” he added.

“That's why there are built-in redundancies in it, but sometimes you just can’t have redundancies for everything”.

Mehta said that experts and technicians need to consider “literally everything” before a space launch.

“From what the temperature of the fuel during loading will be, to the stage 0 launch pad – you even have to consider how to go about standardising certain parts in the ship so that it can be used anywhere”.

But every failure brings us closer to make rocket launches safer and more reliable. Most major launches follow a checklist step by step to see that everything is sorted out, Vepa says.

“The best way of avoiding failure is to have a checklist and make sure you've checked everything,” he explained.

“At the design stage, they must design things like the combustion chamber, check that the resonance frequency doesn't match with any of the possible disturbances, and so on. They have to make sure that there are no flame instabilities. By checking all these things, you can avoid failure”.