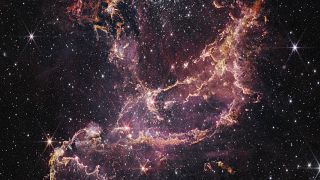 Our naked eye would never be able to see what the telescope sees: travelling through light and space, James Webb can see the origins of the universe - something our minds can hardly begin to grasp.

Working like a time machine, the first images shared by this powerful telescope on July 12 showed us far-off galaxies, the death of stars, and the atmosphere of planets outside our solar system.

Now, over a year after it was launched, James Webb has gifted scientists and all humankind with new breathtaking images from space, this time offering us insight into how stars are born.

The new image, released by NASA on January 11, shows NGC 346, a young cluster of stars that lies within a nebula some 200,000 light years away from our planet.

Scientists are particularly interested in this star cluster because they believe it could give us an idea of how the universe looked during the so-called "cosmic noon," a period of galaxy formation that followed the end of the "cosmic dawn" and went on until three billion years after the Big Bang.

According to NASA, the high-resolution image taken by the James Webb Telescope has revealed "the presence of many more building blocks than previously expected," including stars and planets "in the form of clouds packed with dust and hydrogen".

That means that what we're looking at in this latest stunning image could be the process of the formation of not only stars but planets.

Below are some of the most stunning pictures it released so far.

A deeper look at the Pillars of Creation

The James Webb Telescope captured a highly detailed of the iconic Pillars of Creation - first made famous by images taken by NASA's Hubble Telescope in 1995 - where new stars are forming within dense clouds of gas and dust.

The three-dimensional pillars look like rock formations but are far more permeable. These columns are made up of cool interstellar gas and dust that appear - at times - semi-transparent in near-infrared light.

Building on images taken in 1995 and 2014, Webb’s new view of the Pillars of Creation will help researchers revamp their models of star formation by identifying far more precise counts of newly formed stars, along with the quantities of gas and dust in the region.

Over time, they will begin to build a clearer understanding of how stars form and burst out of these dusty clouds over millions of years.

On October 28, NASA released a second image of the Pillars of Creation, this time as seen by Webb's Mid-Infrared Instrument (MIRI). And it's haunting - in NASA's words, this exceptionally dusty rendering makes it both sombre and "chilling".

That's because while mid-infrared light specialises in detailing where dust is, at these wavelengths, most of the surrounding stars aren’t bright enough to appear.

"Instead, these looming, leaden-hued pillars of gas and dust gleam at their edges, hinting at the activity within," NASA explained.

Thousands of new stars in the Tarantula Nebula

In images released by NASA in September, the nebula 30 Doradus can be seen showcased in all its glory.

Nicknamed the Tarantula Nebula, it's a favourite of astronomers studying star formation, as one of the largest and brightest star-forming regions in the galaxies nearest to our Milky Way.

The Tarantula Nebula lies 161,000 light-years away in the Large Magellanic Cloud galaxy. It gets its name from the long dusty filaments resembling spiders' legs in older images.

The James Webb Telescope, however, captures the stellar nursery in new levels of clarity, showcasing tens of thousands of never-before-seen young stars that were previously shrouded in cosmic dust.

This stunning image is of the so-called Phantom Galaxy (M74). Webb's ability to pick up longer wavelengths of light allows scientists to pinpoint star-forming regions in galaxies such as this one.

This image reveals masses of gas and dust in the galaxy's arms, and a dense cluster of stars at its core.

NASA has also released unprecedented observations of a planet outside our solar system, making use of the James Webb Space Telescope’s powerful infrared gaze to reveal new details that ground-based telescopes would not be able to detect.

The image of exoplanet HIP 65426 b, a gas giant about six to 12 times the mass of Jupiter, is the first time the Webb telescope has taken a direct image of a planet beyond the solar system.

"This is a transformative moment, not only for Webb but also for astronomy generally," said Sasha Hinkley, associate professor of physics and astronomy at the University of Exeter in the United Kingdom, who led these observations.

Taking direct images of exoplanets is challenging because stars are so much brighter than planets, says NASA.

"Obtaining this image felt like digging for space treasure," said Aarynn Carter, a postdoctoral researcher at the University of California, Santa Cruz, who led the analysis of the images.

"At first all I could see was light from the star, but with careful image processing I was able to remove that light and uncover the planet".

Jupiter and its moons like you've never seen them before

NASA scientists have also released new shots of the solar system's biggest planet, describing the results as "quite incredible".

One wide-field picture is particularly dramatic, showing the faint rings around the planet, as well as two tiny moons against a glittering background of galaxies.

"We’ve never seen Jupiter like this. It’s all quite incredible," said planetary astronomer Imke de Pater, of the University of California, Berkeley, who helped lead the observations.

"We hadn’t really expected it to be this good, to be honest," she added in a statement.

The infrared images were artificially coloured in blue, white, green, yellow, and orange, according to the US-French research team, to make the features stand out.

Other discoveries: How the Cartwheel Galaxy is changing

The latest images come just weeks after another batch of images captured by the James Webb team showed us the Cartwheel Galaxy in more depth, taking us another step further in our understanding of the universe by showing us what happens after two galaxies collide.

Peering through the cosmic dust created by the collision with its infrared cameras, the telescope gave us a shot of how the Cartwheel Galaxy is changing after a run-in with another smaller galaxy billions of years ago.

Scientists think that the Cartwheel Galaxy, a ringed galaxy over 500 million lightyears away from our planet which owes its name to its bright inner ring and colourful outer ring, was once part of a large spiral like the Milky Way before another galaxy smashed through it.

The galaxy’s whole look, which reminded scientists of the wheel of a wagon, is due to that high-speed collision, according to NASA. From the centre of collision, the galaxy’s two rings have been expanding outwards, creating that rare ringed shape.

Scientists have never before been able to see clearly into the chaos of the Cartwheel Galaxy and make sense of it.

The Hubble Space Telescope had already peered into the galaxy, but the amount of dust surrounding the Cartwheel Galaxy prevented the telescope from observing the phenomena taking place within the galaxy.

But now, thanks to the James Webb Telescope's infrared cameras, scientists are able to look into the galaxy’s bright centre.

To do so, an image is created by combining Webb’s Near-Infrared Camera (NIRCam) and Mid-Infrared Instrument (MIRI), which are able to see through the dust and reveal wavelengths of light impossible to observe in visible light conditions.

The image obtained shows the formation of stars in the aftermath of the galaxies colliding - a process which is not yet completely understood.

The bright core at the centre of the galaxy contains hot dust, says NASA, with the brightest areas being home to gigantic young star clusters.

What you can see on the outer ring, on the other hand, is the formation of new stars.

The Cartwheel Galaxy is still going through changes and will continue to transform, promising to reveal more secrets about how galaxies evolve over time, even though it might take billions of years.

NASA and the European Space Agency's $10 billion (€9.4 billion) successor to the Hubble Space Telescope rocketed away on December 25, 2021, and has been observing the cosmos in the infrared since summer.

Scientists hope to behold the dawn of the universe with Webb, peering all the way back to when the first stars and galaxies were forming 13.7 billion years ago.

The observatory is positioned 1.6 million km from Earth.

US-China space race: Can countries claim territory on the Moon?

What happened in tech and science in 2022? Take our quiz