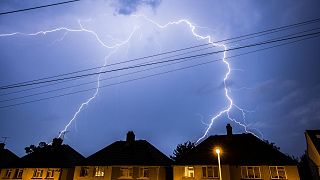 Typically when we fly at altitude, we are exposed to low-level cosmic radiation in the atmosphere. But scientists now believe that passengers flying through a thunderstorm might be blasted by powerful gamma-ray flashes, also known by their more ominous name of "dark lightning".

Unlike visible lightning, dark lightning - the release of high-energy gamma radiation during a thunderstorm - is almost invisible among the clouds, and that’s part of why the phenomenon was only first reported nearly 30 years ago in 1994, some two-and-a-half centuries after Benjamin Franklin discovered a connection between lightning and electricity.

Just like visible lightning, dark lightning only lasts a few thousandths of a second, not nearly enough time to give scientists the chance to properly observe the phenomenon.

Experts estimate dark lightning flashes around the world around a thousand times every day, generally unseen and unnoticed by the public.

But while invisible to the human eye, these blasts are far from insignificant: according to experts, they can carry a million times as much energy as the radiation contained in visible lightning.

While it's unclear how dark lightning is born, most scientists agree that the phenomenon is somehow triggered by the collision of high-energy electrons with surrounding air molecules during thunderstorms.

This release of terrestrial gamma-ray flashes (TGF) during the mysterious phenomenon occurs at 10 to 15 km high in the sky, at the same altitude at which most commercial aircraft fly.

Scientists have suspected for a while now that dark lightning might be hitting passengers flying through thunderstorms, but the impact of the gamma-ray flashes on the individuals affected is not yet clear.

Unlike visible lightning, someone hit by dark lightning would not be immediately hurt.

A new study by researcher Melody Pallu, presented in Chicago, US, on December 13, which combined dark lightning observations with airline routes, found that the mysterious phenomenon is likely to strike near a plane around once every one to four years.

That means that chances of getting hit by dark lightning while flying through a thunderstorm are actually very small - especially as pilots usually try to avoid heading into the path of a storm.

Previous studies have estimated that at an altitude of 12,000 m (39,000 ft), being hit by dark lightning would contain a dose of radiation equivalent to ten chest X-rays.

While danger lurking in the dark is always more fear-inducing than the one we can see, you're statistically more likely to be hit by visible lightning than dark lightning, so this isn't a reason to avoid flying.

But scientists agree further research is needed to discover the full impact of dark lightning on human health.