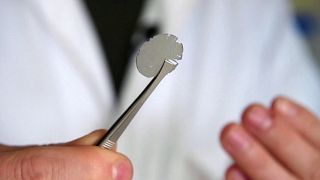 Image shows an 'artificial leaf' developed by scientists at the École Polytechnique Fédérale de Lausanne, that can produce hydrogen from sunlight and air.   -   Copyright  Reuters
By Euronews and Reuters  •  Updated: 17/01/2023

As the world races to find carbon-free energy sources to avert the worst effects of the climate crisis, scientists in Switzerland say they have developed a small leaf-like device that could provide a long-term solution to the issue of renewable energy storage.

Developers of this ‘artificial leaf’ at the École Polytechnique Fédérale de Lausanne (EFPL) were inspired by the natural process of photosynthesis.

“Natural photosynthesis occurs by taking carbon dioxide from the air, together with sunlight, and produces sugar, effectively storing the sun's light in a chemical form,” Professor Kevin Sivula, a chemical engineer at the EFPL, explained.

“We wanted to do the same thing, take sunlight and water from the air and store that sunlight energy in the form of hydrogen,” he added.

The result is a small, transparent wafer of glass fibres covered in semi-conducting material that uses sunlight to split water into hydrogen and oxygen.

“This is really important because there's really a lot of sunlight available, but the sun doesn't shine all the time. So we need a way to store the sunlight for future use and (…) storing the sunlight in the form of hydrogen is a leading method to do this,” Sivula explained.

Although artificial photosynthesis has been demonstrated before, the novel technology solves two previous problems: harvesting the water from the air and powering the chemical reaction with sunlight.

“Our technology has been enabled by this, a transparent, porous, conductive substrate which for the first time allows a semiconductor to be coated and have a large surface area to interact with the humid air,” Sivula said.

The research was published in the scientific journal Advanced Materials.

For now the team is focusing on optimising the mechanics, chemistry and efficiency of the device.

"In the future if we're successful to find a system with a high enough solar-to-hydrogen conversion efficiency and good enough stability, we can imagine these artificial leaf-based systems, both in arid environments like the desert where there's not a lot of liquid water, but also in more humid environments,” Sivula said.