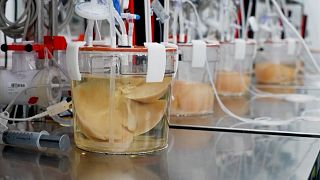 Scientists in a US lab are hard at work on an ambitious and certainly unusual mission: modifying pig livers in the hope of one day transplanting them into human bodies.

Miromatrix, a company based in Minnesota, plans to start testing its bioengineered livers on patients in 2023.

“But this is an incredible time, it's a new era”.

Mount Sinai is one of several hospitals planning to take part in the first trials of the modified livers.

Pending approval by the Food and Drug Administration, the first experiments will be outside a patient's body. Researchers would place a pig-turned-human-like liver next to a hospital bed to temporarily filter the blood of someone whose own liver suddenly failed.

Making the pig livers compatible with human bodies involves making a kind of scaffold of a liver using the animal’s organ.

First, scientists dissolve the pig cells in the livers that made the organ function, leaving ghostly semi-translucent scaffolds floating in large jars.

Because we remove all the cells from that pig organ, our bodies don't see it as a pig organ

To complete the transformation, they then infuse those shells with human cells from donated livers that could not be transplanted.

Those living cells move into the scaffolding's nooks and crannies to restart the organ's functions.

"Because we remove all the cells from that pig organ, our bodies don't see it as a pig organ," explains Jeff Ross, CEO of Miromatrix, which runs the laboratory.

Dr Amit Tevar, a transplant surgeon at the University of Pittsburgh Medical Centre, who is not involved with Miromatrix, cautions that the planned outside-the-body testing would be only an early first step.

But if this novel approach works, “that is something that in the long term may very likely contribute to the development of organs we can use in humans”.

The liver-assist trial would be key toward eventually attempting a bioengineered organ transplant - likely a kidney, because a patient could still survive with dialysis if the operation failed.

Turning to animals for organs

At present, there are more than 105,000 people on the US waiting list for organ transplants.

“The number of organs we have available are never going to be able to meet the demand,” said Tevar. “This is our frustration”.

That's why scientists have been looking to animals as another source of organs.

The FDA is now considering whether to allow additional “xenotransplantation” experiments using kidneys or hearts from gene-edited pigs.

Bioengineering organs is different, however, as it does not require tinkering with pigs - only their leftover organs from slaughterhouses.