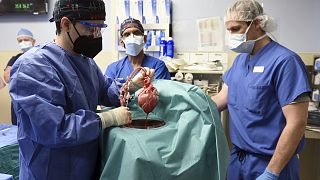 Doctors at the University of Maryland School of Medicine carry out the world's first pig-to-human heart transplant.   -  Copyright  Mark Teske/University of Maryland School of Medicine via AP
The opinions expressed in this article are those of the author and do not represent in any way the editorial position of Euronews.
By Dr Julia Baines  •  Updated: 21/03/2022

It’s relatively easy to have an academic debate on animal-to-human transplants, but let’s make this personal.

Imagine you have advanced heart failure. Your only option is a transplant. But with human organs in short supply, you’re offered a pig’s heart. It’s risky, experimental surgery. Would you take it?

The human instinct to survive is powerful. You might justify it by thinking that the pig would be slaughtered for food anyway, so the heart would have been wasted. You might even imagine the pig living a happy life in rolling green pastures before saving your life.

Let’s look at the reality.

If you took the heart, you would go through complex and painful surgery with a high risk of fatality either during the surgery or not long afterward.

The man who recently underwent the world’s first pig heart transplant survived for only two months, which came as no surprise to scientists.

Pigs used for these transplants are bred and genetically altered in laboratories, where they spend their entire, miserable lives undergoing unspeakable procedures.

Pigs' hearts are designed by nature for pigs, a biologically different species. No amount of research or genetic tampering is going to change that fundamental fact.

As for the rolling pastures, pigs used for these transplants are bred and genetically altered in laboratories, where they spend their entire, miserable lives undergoing unspeakable procedures.

These sentient beings – who, no different from us, can feel fear and pain – are treated as a warehouse of spare parts to be raided by humans.

Their body parts are also transplanted into other animals. Some endure repeated surgeries and are kept alive, suffering from horrific side effects until they’re eventually killed and dissected.

A pig’s kidney was recently connected to a brain-dead human for 54 hours. This “Frankenscience” causes so much suffering.

It’s unconscionable to treat animals as if they were disposable, and it’s not just the unwilling “donor” animals who suffer.

Evidence secured by Peta in September 2020 showed how a desperately ill baboon died in an American lab having endured the transplantation of a pig’s heart into her body. There’s no doubt that xenotransplantation – the transplant of organs between different species – is morally wrong.

There’s also the risk to public health, which alone should be grounds for stopping these horrific experiments.

Animals carry infectious pathogens, including those of unknown origin, and transplants risk transmitting them into humans along with the organ – with unpredictable effects that could spiral out of control.

Among the many tragedies of xenotransplantation is the fact that it draws attention and vital funding away from cutting-edge, human-relevant research which could actually help people.

The world is still coping with a pandemic believed to have resulted from the appalling conditions animals were kept in at a wet market in China, which created the ideal breeding grounds for COVID-19 to leap into humans and start mutating.

You might think animal experimenters would have learned something from that. But no – now, they’re inserting animal organs into humans without any regard for the consequences. These are dangerous vanity projects, carried out to satisfy human curiosity and to grab headlines, and they must stop.

Among the many tragedies of xenotransplantation is the fact that it draws attention and vital funding away from cutting-edge, human-relevant research which could actually help people.

Most of those who need a heart transplant are suffering from heart failure, and scientists working on treatments for cardiovascular disease are using advanced computer modelling and engineered human tissues in their research, which are proving far more accurate than cruel experiments on other species.

More funding would accelerate this work, and PETA’s Research Modernisation Deal provides a detailed scientific roadmap for eliminating the torment and killing of animals in experiments.

Humans who need a transplant need a human organ, and the idea that this pig-heart transplant is groundbreaking is nonsense.

It perpetuates the myth that xenotransplantation will ever be practical.

Changing laws around the world to presume consent for organ donation unless one opts out – which is the case in England – would make many more organs available, and, combined with preventive health measures, would save many more lives than these ghastly, headline-grabbing surgeries ever will.

So, back to my original question – would you take the pig’s heart?

This Egyptian researcher has built a brainwave-controlled wheelchair