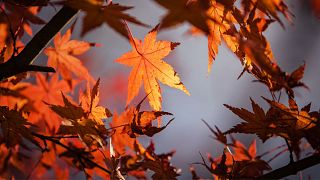 A Ukrainian company that makes paper from fallen leaves has received €2.5 million in funding from the European Commission, after winning a startup innovator programme.

Releaf uses leaves collected by city authorities - that would usually be burned or left to decompose - turning them into paper for writing, bags, and boxes.

It took part in the Commission’s EIC Accelerator 2022 program, which supports startups and innovative high-risk small and medium-sized businesses that can contribute to rapid economic growth.

With their patented technology, Releaf makes cellulose from the leaves’ fibres.

Alexander Sobolenko, the CEO of Releaf Paper told Euronews Next last month that there are three main reasons a company like his is needed: deforestation causing environmental damage globally; growing demand for packaging; and increased environmental awareness amongst consumers.

“We do not collect the leaves, we use existing processes.In European cities, in Ukraine, the infrastructure of leaf gathering is already in place. So we just made a deal with the city authorities,” he said.

“We are offering the city a free of charge solution - they deliver the leaves to our productions, we clean them, we granulate them, and then we process the leaves into cellulose”.

The system works with any kind of leaf, giving the company easy access to the raw materials they need, he said.

“First of all we do not fell the trees to produce the paper. Secondly during the production of Releaf Paper the emission of Co2 is 78 per cent less. Also we consume three times less energy and 15 times less water. Our paper is biodegradable, recyclable, it’s the most sustainable paper made from any type of raw materials”.

The idea - and the technology for Releaf Paper - came about when Sobolenko’s business partner Valentyn Frechka developed it at the age of 16 as a school project.

Winning a host of innovation prizes along the way, Releaf now has its sights set on expansion.

Sobolenko said Russia’s invasion of Ukraine has had a big impact on their business, causing them to lose most of their Ukrainian customers, which has forced them to look for buyers in the international market.

With the EU grant, along with previous funding from the likes of Google and WWF, the aim is to set up production in two European countries within five years.

"We are closer than ever to the goal of starting a series of our own production line of the new generation, where the paper of the future, Releaf paper, will be created,” said Frechka.

“When at the end of this year everyone is talking about reducing carbon footprint, deforestation and stopping environmental catastrophe, we are taking real steps to revolutionise the paper industry!”

The prize of €2.5 million is awarded as a grant, while additional funding may exceed €10 million with the Commission agreeing to fund further scaling of the project.

Which EU countries are the worst when it comes to e-waste?