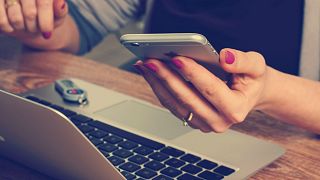 For anyone who is planning to buy their loved ones the latest tech this year - phones, laptops, games consoles - the good news is, Christmas isn’t cancelled.

But it also won’t come as a shock that this Christmas, 70 per cent of adults are looking to spend less, according to a survey from Irish-American IT company Accenture.

Businesses around the world are responding to the increasing demand for gadgets that won’t cost us a small fortune in the midst of the cost of living crisis. And expense aside, we all know there’s an ever-evolving trend towards buying second hand as the climate crisis continues to dominate headlines.

Back in November, eBay predicted that 52 per cent of consumers will be shopping second hand this year. That’s one thing when we’re talking about clothes, toys or books - but what about tech?

Buying second hand tech isn’t just about saving on expenses. The WEEE Forum (Waste Electrical and Electronic Equipment Forum), an international not-for-profit, estimates that more than 5 billion mobile phones will be thrown away this year alone.

To put that in context, if the phones were piled on top of each other, the stack would be 50,000 km high – one-eighth of the way to the moon.

So as well as being good news for your pocket - getting tech second hand is good for the planet too.

If this is your first time venturing into the world of second hand tech, the lingo is everything.

“Used” or “second hand” items tend to come from the previous owner, and are nine times out of 10 unlikely to have received any sort of enhancement.

Meanwhile, “revamped” or “refurbished” items have probably been sold on to an individual or business that specialises in ensuring the tech is as good as new ahead of resale. While the price point will be higher, you’re also buying a more reliable product.

Swapping Instagram-perfect packaging for second hand swag has really caught on this Christmas, as Euronews Next found out.

“What I do like about Marketplace is firstly it really is generally very good value, and there’s often a local element to it,” she said.

“Generally speaking, I’ve had good experiences with it, and if I go and pick an item up I can check its quality before I pay.

“The Switch I just bought is in really good condition, and saved me a small fortune compared to if I was going to buy one brand new”.

“Yes, as a general rule. Our house has smart home features that we installed brand new, and for my little boy’s birthday in the summer we bought him a tablet which was new,” she said.

“But a lot has changed in the six months since and unfortunately the decision has to be between heating bills and a budget Christmas”.

Unregulated sites like Marketplace and eBay arguably aren’t necessarily the best spaces you could buy your recycled tech, which is often reflected in their lower price points.

While some legitimate sites do have a presence on the platforms, often it’s your average Joe Public selling on the iPhone he bought in the early naughties with the disclaimer “Screen doesn’t look as scratched in real life”.

Marine, 46, from Marseille, France, has two teenage children, and has experience buying revamped tech for them to use for schoolwork.

“We would normally always buy our technology online or from the real shop. But we did some research and saw that we could save a lot of money if we bought it refurbished,” she told Euronews Next.

“We are lucky because we have a local business where we live so we have been able to buy our children what they need for while they take their studies.

“Maybe after we can go back to buying things new again, because I still think that is the most trustworthy way”.

Where should you buy second hand tech from?

There are multiple, global businesses who specialise in revamping old technology and selling it on to a new home.

Brands like Game and CeX have evolved from their original identities as the high street stores where teenagers (and adult men) could get their hands on the latest console games to offering a refurbishment service.

UK-based musicMagpie has long been cited as one of the pioneers and Envirofone delivers across Europe.

The main piece of advice is to always double check the authenticity of your seller when you’re buying tech second hand, and ensure it comes with a warranty so you aren’t disappointed down the line.

Extreme temperatures increase the risk of dying from heart diseases