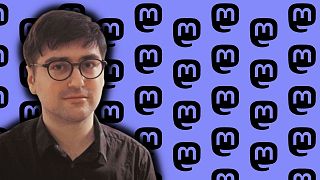 "There is no way to control when success comes, only to lay a foundation for it," Eugen Rochko, the creator of Mastodon, said in a 2018 interview.

These words now sound like they were premonitory for the 29-year-old German programmer, who has been gaining notoriety in recent weeks as his social network attracts hordes of disenchanted Twitter users.

"People are voting with their feet. The future of social media doesn't have to belong to a billionaire, it can be in the hands of its users," Mastodon posted on Twitter this week, saying it now had over 2 million active monthly users, up from 1 million just two weeks ago.

So, what exactly do we know about Rochko and how different is he from Twitter’s new owner Elon Musk, the world’s richest man?

Rochko was born in Moscow but his family emigrated to Germany when he was 11 years old.

He grew up using classic social networks such as Instagram, Facebook, and Twitter. While he enjoyed the online interaction these allowed, he says he became wary of the concentration of these technologies in the hands of large private American companies.

In 2016, when he was 24 years old and had just wrapped up his computer science studies at the University of Jena in Germany, Rochko launched Mastodon based on open-source technologies – as opposed to proprietary software.

In the company’s 2021 annual report, he revealed that he had first started working on the project in his bedroom while still living in his parents' flat.

While Mastodon started out as an experiment alongside his studies and freelance work, Rochko told Wired in an interview that he had been working 14 hours a day ever since the network exploded in popularity this past month.

Rochko and Mastodon did not reply to Euronews Next’s request for comment.

To function, Mastodon relies on a whole network of interconnected servers, or a "fediverse" in the platform’s jargon. A new user joins a server, also called an "instance," and can then publish posts of up to 500 characters.

On his own account, which is followed by more than 200,000 people, the computer scientist shares the latest developments in his social network and re-shares photos of cats.

A person can also choose to create and host an instance – a voluntary organisation that has been put to the test with a sharp jump in new users: over one million since last month.

A decentralised social network, Mastodon takes a stand against the practices of Big Tech by embracing different technology and a different philosophy. Rochko’s work is, with just a few clicks, accessible to everyone and free of charge.

"A centralised social media platform has a hierarchical structure where rules and their enforcement, as well as the development and direction of the platform, are decided by the CEO, with the users having close to no ways to disagree,” he explained in a post in December 2018.

For him, decentralisation is the "hallmark of a healthy ecosystem" to ensure Mastodon's longevity and resilience.

A network funded by its users

One difference that Mastodon users will probably be happy about is the absence of ads on the platform. Another notable choice: there is no algorithm and the publications are presented chronologically.

Away from the volatility of stock markets, Rochko pays himself and finances Mastodon through donations via membership platforms, such as Patreon.

When Elon Musk says that everything’s gonna be allowed, or whatever, I generally disagree with that

"The bigger a server grows, the more it costs to host, obviously. And when you are not interested in monetisation or profit extraction, growing is actually, like, a negative thing," he told Wired.

However, thanks to his newfound fame, financial donations for Mastodon's development have seen an "unprecedented" surge.

The size and structure of Mastodon sure look very different when compared to those of rival social media giants. In the company’s 2021 annual report, Rochko was the only permanent employee, earning €2,400 per month, alongside a handful of contractors.

Due to its open-source, decentralised nature, Maston is also growing thanks to the work of volunteers, such as the people hosting its servers.

The thorny issue of moderation

On the issue of freedom of speech and moderation, which social networks have been grappling with since their creation, Rochko’s views are starkly different from those of Twitter’s new billionaire owner.

"I think that is a very uniquely American idea of creating this marketplace of ideas where you can say anything you want completely without limits,” Rochko said in an interview with Time magazine.

“It is very foreign to the German mindset where we, in our Constitution, our number one priority is maintaining human dignity. And so, hate speech is not part of the German concept of free speech, for example," he explained.

"So I think that when Elon Musk says that everything’s gonna be allowed, or whatever, I generally disagree with that".

On Mastodon, moderation is adjusted according to each server more or less strictly. According to Rochko, this is a way for users to have a social network that looks and feels like them.

Servers hosting hateful content are not promoted and can be blocked by users. Hate speech is then ostracised, thus reducing the echo chamber phenomenon.