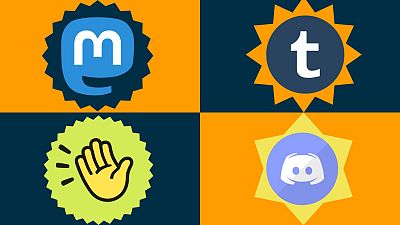 These are just a few of the social media apps hoping to fill the Twitter-shaped hole left in dissenters' hearts.   -   Copyright  Canva
By Amber Bryce   •  Updated: 22/11/2022

While it might sound a little dramatic, the prospect of Twitter’s demise under Elon Musk’s tumultuous ownership felt closer than ever on Friday, with hundreds of employees - including engineers and developers - leaving the company following an ultimatum from its new CEO.

Since then, the billionaire has reinstated several banned accounts, including that of former US president Donald Trump who was permanently excluded from the site in 2021 following the January 6 US Capitol attack.

Many Twitter users, including celebrities like actress Whoopi Goldberg, have already chosen to leave the platform, but there’s now a great deal of uncertainty around whether it will continue to function for those that remain.

The unpredictable nature of Musk’s decision making, paired with mass staff resignations and layoffs, has led Twitter’s most dedicated users to question when they should "break up" with a platform that is becoming less and less recognisable to them.

But what alternatives are there? Would we really return to nostalgic favourites like MySpace and Tumblr, or look beyond to more innovative and independent alternatives, like Mastodon and Cohost?

We’ve rounded up a list of the most popular choices - even if, in reality, most people will stay on Twitter, scrolling through the timeline and trends until their engagement finally flickers out.

A few months ago, hardly anyone had heard of Mastodon. Now, it’s one of the most popular alternatives to Twitter - if you can figure out how to sign up.

Launched in 2016, the free open-source platform is essentially a decentralised version of Twitter, made up of various interest-based servers known as “instances”.

Feeling lost already? You’re not alone. This somewhat unintuitive introduction to the platform has been off-putting to some users, as they struggle to locate a server and their friends.

However, if you make it past the initial confusion and settle into one of the (reportedly over 7000) "instances," you'll find yourself in more familiar territory, with a feed showing “toots” instead of Tweets from those you follow, and "boosts" in place of re-tweets.

Adapting to Mastodon might take a while, but it does offer a welcome reprieve from the non-stop noise of Twitter. It’s also completely free of advertisements and there’s not a blue tick (or meme from Elon Musk) in sight.

Tumblr is a social media website that was launched in 2007 and allows users to post long-form, blog-style content with media elements such as photos and GIFs.

At its peak, Tumblr had over 100 million users in early 2014. It was the go-to for alternative and queer communities in particular, with users sharing their innermost thoughts, fan theories, artsy photography, poetic quotes, and "re-blogging" GIFs from the Twilight film franchise.

At the heart of Tumblr’s addictiveness is its reverse chronological timeline, willing you to scroll through every aesthetically pleasing post until you reach the very bottom of the page.

And if displaced Twitter users don’t revive Tumblr’s fortunes, its new content guidance rules surely will, allowing nudity back on the platform after an infamous ban on pornography in 2018.

If you’re what’s known as a "chronically online" person, you’ve likely heard of Discord, a chat app that has become popular well beyond its original constituency of gamers.

It’s most comparable to instant messaging services like Whatsapp and Slack, with different Discord servers created for specific communities and topics. The main appeal is being able to communicate in real-time using text, video, and audio.

Cohost is an independent and invite-only platform, built by a small team of developers and designers that are attempting to re-think the corporate landscape of social media.

It plays with the idea of subscription-based social media, charging "a few bucks a month" for an ad-free, exclusive service that will allow users to receive tips and sell subscriptions in the future.

It's also removed one of the most controversial elements of most mainstream social media platforms -the algorithm. All your followers' posts appear chronologically, allowing for more effective human moderation.

Founded by former US president Donald Trump, Truth Social is, at its core, a version of Twitter for conservatives.

If you’re looking to escape all the political turmoil and toxic echo chambers of Twitter, this is probably not the best place to move to. It’s also only available to users in the United States currently.

Tribel describes itself as a "bigotry-free social network where kindness and intelligence flourish," which sounds almost too good to be true when you’ve spent countless hours battling trolls on Twitter.

The vertical setup is easy to navigate, allowing users to share posts and modify their topics of interest, curating a more personalised feed.

In contrast to Truth Social, Tribal is owned by two pro-Democrat activists, Rafael Rivero and Omar Rivero, catering mainly for a left-wing audience.

Clubhouse is a social audio app, which gained massive popularity during the COVID-19 pandemic when people were confined to their homes, unable to host discussions in real life.

Users can join live "Rooms" to participate in - or just listen to - an audio conversation on different topics (although they’re mostly business-related.)

While originally it was invite-only, anyone can now join Clubhouse with their phone number.

It’s debatable as a form of social media, but many journalists on Twitter are moving their audiences over to Substack, an online newsletter platform for content creators.

Anyone can sign-up and start writing and then distributing their content to an audience, either for free or at a subscription cost.