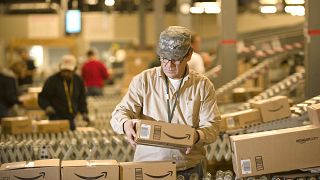 Amazon is set to cut 10,000 jobs in its corporate and technology sectors starting this week, according to reports.

The layoffs will focus on the e-commerce giant’s devices unit, which houses voice-assistant Alexa, as well as its retail division and human resources.

As of December last year, Amazon had about 1,608,000 full-time and part-time employees. It had already instituted a hiring freeze after warning that it had over-hired staff during the COVID-19 pandemic.

The reported cuts will represent about 3 per cent of Amazon’s corporate staff and less than 1 per cent of its global workforce.

Billionaire Jeff Bezos, Amazon’s founder, has warned that he believes the US is either in or heading towards a recession and that people and corporations should "batten down the hatches".

If confirmed, this downsizing will be the largest in Amazon’s history and comes as other tech companies are also shedding workers.

Last week, Facebook-parent Meta Platforms said it would be cutting more than 11,000 jobs, or 13 per cent of its workforce, to rein in costs.

Earlier this month, new Twitter owner Elon Musk decided to cut half of the platform's workforce of 7,500.

For more on this story, watch the report in the media player above.