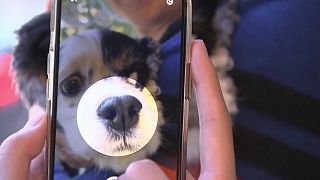 A South Korean company has developed a biometric recognition tool allowing dogs to be identified by their nose prints.

Once pet owners register the nose pattern and general information of their dog into an app called "Anipuppy", the information can be easily recalled by scanning the dog's nose print.

“It's a 3D biometric algorithm based on AI (artificial intelligence) and deep learning that we have now put into smartphones so that you can take pictures of the nose patterns and use it to identify each animal," said Sujin Choi, director of iSciLab Corporation.

With the new technology, which the company says is 99.9 per cent accurate, people who find lost dogs can quickly and directly communicate with their owners.

Currently, it is mandatory to register pets with a microchip or an external ID in South Korea. However, the country hasn’t seen an increase in registration since the introduction of the pet registration system in 2007.

Only 38 per cent of the nation's 6 million pet dogs were registered, according to a 2020 report by the South Korean Ministry of Agriculture, Food and Rural Affairs.

Animal rights experts say pet owners are hesitant as they are concerned about the cumbersome process and potential health problems of microchip implants.

That's where the nose ID solution comes in handy - it's not intrusive and much quicker to administer than inserting a chip.

iSciLab has been collaborating with the South Korean government since 2019 to develop and test its nose ID technology for commercialisation.

The project aims to be completed by 2024 so it can become an official dog identification and registration method for the country's database.

The company expects to charge around €14 per dog.

It says that in the future, the technology could be used to identify other animals such as cats, cows and deer.

iSciLab's biometric recognition technology is currently patented in South Korea but also in the United States, Europe, Canada and Japan.