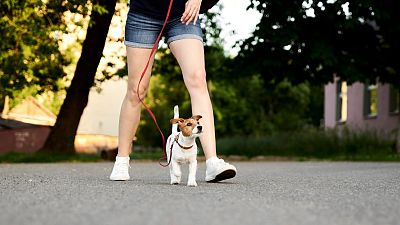 Tel Aviv in Israel is turning to tech to track down dog owners who leave their pet's waste on the city's pavements.   -   Copyright  Canva
By Tom Bateman  •  Updated: 16/07/2021

Dog owners in the Israeli city of Tel Aviv will soon have to register their pet's DNA in a database of the city's canine residents.

The new rule comes after local councillors approved a by-law aimed at curbing the amount of dog faeces left on the city's streets.

Schwartz added that municipal workers pick up around half a ton of droppings every month.

"Among 40,000 dog owners, a very small minority don't pick up their waste. But this minority amounts to 500 kg of waste that we pick up every month from the sidewalks.

"We have decided that the time has come to put an end to this phenomenon, and chosen a technology that identifies with total accuracy all of the responsible dogs and their owners".

Dog poo: A hot topic on the doorstep

Under the new system, city officials will be able to test abandoned dog poo for DNA that will enable them to track down the owner and issue a fine.

Tel Aviv is home to an unusually high proportion of dog owners who account for roughly one in every 11 residents.

We have decided that the time has come to put an end to this phenomenon, and chosen a technology that identifies with total accuracy all of the responsible dogs and their owners.

The new law – which still needs to be approved by Israel's Interior Ministry before being put into practice – will mean dog owners must provide a sample of their pet's DNA when applying for a dog licence.

Dog poo has become a hot topic in Tel Aviv. In April the city launched a public awareness campaign calling on the two per cent of careless dog owners to pick up after their pets.

While the concept of a dog DNA database may sound unusual, Tel Aviv's will not be the first.

To catch a thief

Last month, police in the English county of Gloucestershire launched their own dog DNA database, aimed at curbing rising levels of dog theft.

The database is a world first, police said. Rates of dog theft in the UK have skyrocketed during the course of the COVID-19 pandemic.

Under the programme, known as "DNA Protected", owners can pay £75 (€88) to have their pet's DNA entered into a database accessible by police forces across the UK.

"DNA is unique, a fact that has enabled forensic services to identify criminals for many years. With the application of the same processes used for human identification, the DNA Protected service promises a searchable database of canine DNA information," Chris Allen, head of forensic services at Gloucestershire Police, told the AFP news agency.

All of Gloucestershire's police dogs have already had their DNA entered into the database, police said.

This doctor injected himself with microchips to make life simpler