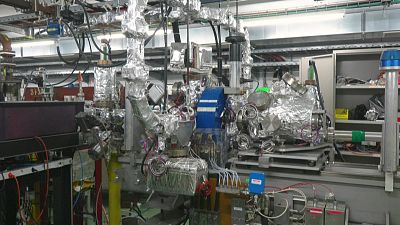 As the world’s largest particle physics laboratory, the European Organization for Nuclear Research (CERN) usually focuses on expanding our understanding of the universe.

But lately, some researchers at the institution have been trying to take on one of the biggest killers here on Earth, by applying their particle physics knowledge to cancer treatment.

They are developing a particle accelerator, in collaboration with the Lausanne University Hospital (CHUV), to push the boundaries of radiation therapy and zero in on hard-to-reach tumours.

Their machine generates very high energy beams of electrons – the negatively charged particles in the nucleus of an atom – with the aim of zapping cancerous cells in a more targeted and effective way.

The scientists behind it hope it could help treat deep-seated tumours or those close to sensitive organs, such as brain tumours, in a short but intense burst of energy that delivers the radiation dose in a few hundred milliseconds instead of minutes.

The method is believed to have the same destructive effect on the targeted tumour, but causes far less damage to the surrounding healthy tissue.

'Could be a game changer'

The technique was first used on patients in 2018, based on currently available medical linear accelerators, linacs, that provide low-energy electron beams.

But those beams cannot penetrate deeply, meaning the treatment has so far only been used on superficial tumours found in skin cancer.

Enhancing the reach of radiation with the new high-energy accelerator will allow electrons to penetrate much deeper and tackle tumours that are currently much harder to reach, and typically fatal.

"It's the ones which we don't cure at the moment which will be the target,” Professor Jean Bourhis, head of CHUV's radiology department, told AFP.

“And for those particular cancers, which may be one-third of the cancers, it could be a game changer"

One challenge will be to make the machine compact enough to fit inside a hospital.

The gigantic linear particle accelerator consists of a 40-metre metal beam with tubes packed in aluminium foil and a vast array of measurement instruments and protruding colourful wires and cables.

The construction of a more compact prototype – expected to measure just around 10 metres – is set to begin in February 2023, while the first clinical trials in patients could start in 2025.