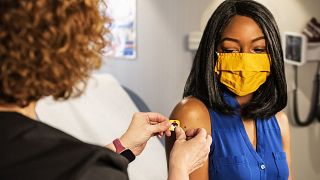 There are several reasons you should be considering a COVID-19 booster shot this winter.

Firstly, it’s due to be a cold one across Europe - further impacted by the continent’s cost-of-living crisis which is seeing many people trying to save on energy where possible.

We already know that winter is a hotbed for respiratory diseases, not limited to COVID and the flu, and delaying switching on the heating has the potential to exacerbate this problem.

Secondly - when was the last time you got boosted? If it was over six months ago, the likelihood is its effectivity is now waning, putting you at greater risk of contracting the virus.

And perhaps the final most prevalent point is that with more common illnesses in the air this season, we’re putting ourselves at greater risk of variants (case in point, the Delta variant peaked in Europe last winter).

On October 21, the European Centre for Disease Prevention and Control announced that at least five EU/EEA countries have detected the circulation of the SARS-CoV-2 variant sub-lineage BQ.1, a strain of Omicron.

It's now predicted that BQ1 and its sub-lineage BQ1.1 will become the dominant COVID-19 strains across Europe by November.

Early this year, University Hospital Southampton in the UK led the COV-BOOST trial which found that a fourth dose of the vaccine is completely safe, and boosts antibody levels even more than the third dose.

But is it definitely necessary to have a fourth COVID vaccine this winter?

The short answer is yes

Dr Helena McKeown, former chief officer of the British Medical Association, says having the fourth jab should be a priority for anyone who is eligible - especially the elderly and those with underlying health issues.

“Not only for ourselves and our families, but to minimise the spread and evolution of COVID as we head into the colder months,” she told Euronews Next.

“The cold weather brings with it a host of additional health issues every year, like the flu, and we’re due a pretty grim winter. Having your fourth shot will keep you and your loved ones safe and reduce the strain on medical services around the world".

Is there an argument for not having the fourth jab?

The line of attack on COVID vaccines was rolled out before the vaccine itself.

The "my body, my choice" argument appears to spread more easily now that the virus is seemingly more under control.

While there have certainly been vaccine sceptics in and among the medical profession, the overall verdict is pretty unanimous: there’s no reason not to have the booster.

To quote Gemma Peters, Chief Executive of Blood Cancer UK, "it could be a decision that literally saves your life".

Do I need to get a fourth shot if I’ve already had three?

The booster shots do what they say on the tin. It’s widely acknowledged that the current COVID boosters do not provide lifelong protection against the virus - essentially, it will wear off as time passes.

If you want to make sure you’re as safe as possible as we head into the winter months, the fourth booster will help to cover it off.

How long do COVID booster jabs protect you for?

There’s no definitive answer to this as it depends on which booster you have as well as your age and health status.

In a podcast, Dr Katherine O’Brien from the World Health Organization (WHO)  – who directs the agency’s work on vaccines and immunisation – stated that boosters offer maximum protection for around two to four months, and give a decent level of protection for up to six months altogether.

Who is eligible for a fourth COVID vaccine?

It depends on where you are and your personal circumstances.

In the UK, the booster was first offered to people aged over 50, residents of care homes, health care workers and those aged 5 years and over who are in risk groups. These are being rolled out between September and December.

Meanwhile, in France, the fourth dose campaign was opened up to people aged 60 and over as early as April this year, so long as it had been at least six months since their last vaccination.

At the start of October, France also launched a dual-strain vaccine for vulnerable groups which tackles both Omicron and the original COVID strain, similar to the US’ “bivalent” vaccine.

In Italy, the health ministry was urging the elderly and those with compromised immune systems to have the fourth vaccine at the beginning of this year. Now, it has opened up the offering to the over-60s as we head into the winter months.

Germany has been offering a fourth boost of the vaccine since the start of this year to those over 60.

If you’re unsure about whether you’re eligible, either call your doctor or take a look at your country’s government advice.