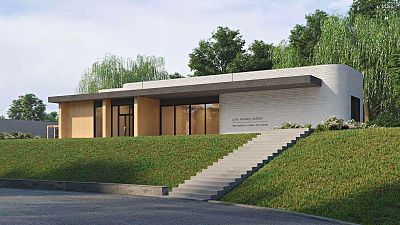 Amid the war-scarred streets of the Ukrainian city of Lviv, which has been heavily bombed by the Russians, the foundations of the world’s first 3D-printed school to be built in a war zone have been laid this week.

The ambitious project - which has never been undertaken before on the ground amid an ongoing conflict - was initiated and funded by the non-profit tech and humanitarian start-up TEAM4UA in cooperation with the city authorities and other companies who are putting 3D technology at the service of those displaced by the war in Ukraine.

Over 2,000 schools have been damaged or destroyed in Ukraine since the beginning of the Russian invasion on February 24, according to the country’s defence ministry and "Save Schools," a Ukrainian project which keeps track of all damaged and ruined schools in the country by compiling images of the destroyed buildings and the dates they were hit by shelling.

As a result of the invasion, which is still unfolding over seven months later, some 3.6 million children are at risk of missing classes, while 1.5 million are at risk of suffering mental health issues, according to international aid organisation World Vision.

Many charities and international non-profit organisations have been raising alarm over the plight of school children in Ukraine.

"With each day that passes in this war, children’s lives and futures are put at greater risk," Onno van Manen, Save the Children’s acting Country Director in Ukraine, said.

In the Lviv region, where the school will be built, there are 250,000 officially registered internally displaced people, over 75,000 of which are children.

This is perhaps why, when TEAM4UA offered its service to the city, Lviv asked first for a school to be printed.

Building the school’s walls with a 3D printer will be faster and cheaper than constructing a new building in concrete from scratch, according to the tech start-up, which it says could take up to two years.

What’s more, the project is much more sustainable than traditional construction techniques, it says.

"It saves time. It's efficient as far as it concerns energy costs, and it's going to be quick," Charles Tiné, member of TEAM4UA’s strategic committee, told Euronews Next.

"And the buildings produced are very long-term, they last for a long time. The insulation is done very efficiently, it's not like putting refugees into buildings that would last two weeks.

"It's long-term, and when it's finished, you can pack up your printer, put it on a truck and move somewhere else".

The success of this initiative could see an upsurge in the use of 3D technology for reconstructing destroyed buildings in Ukraine, including homes.

According to TEAM4UA, some 10,000 homes need to be rebuilt across the country.

The final goal, said Tiné, is to bring a total of 15 3D printers to Ukraine, train Ukrainians to use them, take the debris of buildings destroyed by the war and recycle that concrete to print new buildings.

Tiné is confident that the school will be just the beginning of the use of 3D printing in the country and in other places in the world that might need it.

"We can print bridges, warehouses [after the school]," Tiné said. "And once the war is over in Ukraine, the idea is to move these printers to other places where it’s needed, after an earthquake or after similar disasters".

The recent Russian strikes against civilian targets, launched by Moscow in retaliation for the destruction of a key supply bridge between Russia and Crimea, have put Lviv once again under fire.

On Tuesday, a Russian missile hit critical infrastructure in the city.

Tiné said that the strikes won’t stop the construction of the 3D-printed school - but the blackout the city has experienced after Russian strikes hit an electricity supply in the Lviv region on Monday is likely to hinder efforts to build it.

Construction may be delayed, but Tiné is positive the school will be built - as soon as it’s safe for the crew to get into Ukraine.

"This will absolutely not divert us one centimetre off the target, which is to help people reconstruct what has been destroyed and to receive long-term education," he said.