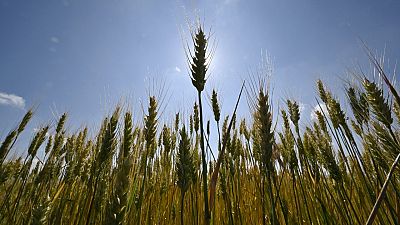 Six months of war in Ukraine have highlighted the importance of the country’s agriculture sector in the global food supply chain but concerns are mounting over the possibility of a cyberattack on this key industry.

The price of grains and other commodities was already high before the war, which began on February 24, but agri-food prices have been exacerbated to new highs by Russia’s invasion, especially since both countries play a major role in world trade.

Not only has the European Commission warned the bloc’s agri-food sector to brace itself for impact, but this has especially affected import-dependent countries in the Middle East and North Africa (MENA) region and sub-Saharan Africa, which relies heavily on Russian and Ukrainian wheat.

With no end in sight to Ukraine's war and as the vital global importance of the country’s agriculture becomes more prominent, experts fear the sector will fall prey to cyberattacks.

The team, which has for the past six years been actively involved in assisting public and private institutions in Ukraine to defend themselves against state-sponsored actors, is on high alert to all types of cyber threats during Ukraine's Independence Day on August 24.

"The threats to the Ukrainian agriculture will remain significant, but mostly from the effects of the war," Joe Marshall, a senior security strategist at Cisco, told Euronews Next.

"While they’ve been able to open the port of Odesa to ship products, they will have significant issues with logistics, labour, and safety that will impact the current and future agriculture production".

Up to the cyber security challenge

Often referred to as the "breadbasket of Europe," Ukraine’ is one of the world’s largest exporters of wheat in the world and the country relies on farming as a key source of revenue, which the UN estimates accounts for 20 per cent of the country’s GDP.

Ukraine’s and the world’s reliance on its grain and the global media attention to it will motivate cyber threat actors, Cisco Talos says, adding that the majority will be financially motivated ransomware actors and disruptive attacks carried out by state-sponsored advanced persistent threats (APTs), which seek to steal data.

In April, the US Federal Bureau of Investigation (FBI) issued an alert warning that hackers have been actively targeting agri-food businesses during the harvest and planting seasons.

While Cisco Talos highlighted there have not been specific attacks on Ukraine’s agriculture sector at this stage, it seems that the sector is fragile and fragility creates an opportunity for attackers.

"A cyberattack, like a ransomware attack, has the capability to impact production yields from agriculture victims. An inability to plant, harvest, fertilise, or manage animals in a specific time window can have a detrimental impact on production yields," said Marshall.

"Globally, this could create a ripple effect, where the food supply chain is threatened with the inability to provide necessary products and services that can further dimmish the global food supply".

The war in Ukraine has been marked by sophisticated cyberattacks which began even before Russian troops stepped onto Ukraine’s soil. Experts say many of the cyberattacks were for espionage purposes but also so-called wiper attacks which destroy data on machines.

Ukraine blamed those attacks on Russia but Moscow denies any involvement.

"Ukraine has matured greatly in its cyber defence capabilities and continues to do heroic things to keep the country safe," said Marshall, adding that they many persistent adversaries and must remain vigilant.

"Given how well they’ve done I think they are more than capable of that challenge," he said.