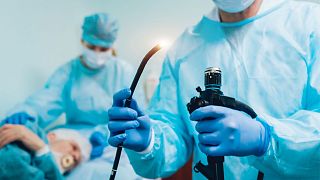 A landmark study found that inviting people to a colonoscopy didn’t cut the risk of colon cancer and related deaths as much as expected.   -   Copyright  Canva
By Natalie Huet  •  Updated: 12/10/2022

Having a doctor insert a long, flexible tube fitted with a small camera up your rectum to explore your bowels is not a procedure you’d typically look forward to.

For years, colonoscopies have been an awkward and dreaded rite of passage for middle-aged people invited to check for early signs of colorectal cancer, the second deadliest cancer worldwide.

Now a landmark study suggests the benefits of colonoscopies to prevent cancer may be overestimated – or rather, that the procedure is still daunting to many, limiting its overall effectiveness as a screening tool.

A large northern European trial that followed up on nearly 85,000 people after 10 years found that inviting people to a colonoscopy only cut bowel cancer risk by about one-fifth and that it didn’t significantly reduce the risk of cancer-related death.

In an editorial accompanying the study, which was published in The New England Journal of Medicine, gastroenterology experts called the results "both surprising and disappointing".

However, cancer campaign groups were quick to highlight the study’s limitations and emphasise the importance of colonoscopy in detecting cancer early, when it’s easiest to treat.

The American Cancer Society recommends colorectal cancer screening, including colonoscopy, for adults beginning at age 45. There’s no reason to change that direction

Only a minority of the study participants invited to have a colonoscopy actually showed up to get it, which likely diluted the observed benefits of the procedure.

Cancer treatments have also improved in recent decades, and 10 years may still be too early to see a real benefit from colonoscopy screening – which is why the researchers plan to repeat their analysis after 15 years.

"Preventive cancer screenings are the best and most trusted way to save lives," Dr Karen Knudsen, Chief Executive Officer at the American Cancer Society, said in a statement reacting to the study.

"That’s why the American Cancer Society recommends colorectal cancer screening, including colonoscopy, for adults beginning at age 45. There’s no reason to change that direction. Recommended cancer screenings should be a routine part of good health".

Colonoscopy is currently the main screening test for colorectal cancer in the United States, where health authorities recommend it be performed every 10 years.

In contrast, colonoscopy screening has not been adopted in many other parts of the world, partly because evidence from randomised trials regarding its effectiveness was lacking.

Most countries in Europe have preferred to focus on using cheaper faecal immunochemical tests (FIT) which look for blood in your stool.

This new study is the first to compare colonoscopy screening with no screening in a randomised controlled trial, the gold standard in clinical research.

The team, led by researchers at the University of Oslo started its work more than a decade ago, recruiting more than 84,000 people aged 55 to 64 across Poland, Norway, and Sweden.

Roughly 28,000 of the participants were randomly selected to receive an invitation to get a colonoscopy, and the rest went about their usual care, which did not include regular colonoscopy screening.

Overall, the study found that if you invite 455 people aged between 55 and 64 to get a colonoscopy, you’ll prevent just one case of colorectal cancer.

However, there are important caveats to this study. The main one is that among the participants invited to get a colonoscopy, only 42 per cent actually went to get one.

"Screening can be effective only if it is performed," read the editorial accompanying the study, adding that higher levels of participation should lead to greater reductions in the risk of cancer and related death.

And there’s room for improvement: the percentage of participants in the invited group who underwent screening was much higher in Norway (61 per cent) than in Poland (33 per cent).

All in all, the data shows that colonoscopy as a screening tool reduces a person’s risk of colorectal cancer anywhere between a low of 18 per cent to a high of 31 per cent – and the risk of death by as much as 50 per cent.

"The real effect is somewhere in the middle," study co-author Dr Michael Bretthauer, a gastroenterologist at the University of Oslo, told Euronews Next.

"I think that's a pretty credible benefit for a cancer screening tool," he added.

Still, the overall cancer risk reduction was lower than what the researchers had anticipated based on observational and modelling studies.

The editorialists reviewing the study said the findings could make it hard to justify “the risk and expense” of colonoscopy as a routine form of cancer screening when simpler and less invasive methods – such as sigmoidoscopy, which only explores the lower part of the intestine, or FIT screening which only examines stool samples – are available.

“I think the difference between the effectiveness of FIT screening and colonoscopy may be not as large as the Americans had thought it would be,” Bretthauer said.

This means asking people aged 50 to 74 to send stool samples to labs, followed up with a colonoscopy if their FiT test shows signs of blood in their stool.

"During a colonoscopy, it is possible to see whether there are any changes within the bowel but more importantly, it is often possible to remove some polyps in the bowel, enabling detection and removal of lesions even before they become malignant," Maravic explained.

She stressed that colorectal cancer, if diagnosed early, can be successfully treated and cured with a five-year survival of more than 90 per cent, but that this survival rate drops massively when cancers are diagnosed at later stages – to just 10 per cent for metastatic bowel cancers.

"Colorectal cancer screening saves lives," Maravic stressed, adding she hopes more people will turn up for their screening appointments in the future.

"We often talk about AI-driven medicine and how Big Data will improve patient outcomes, but none of this will work if we don’t convince people to take the test and get that data in the first place".