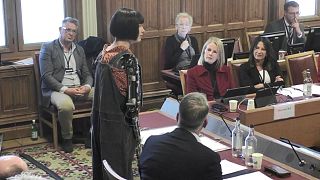 Politicians are often accused of giving robotic answers when facing questions - but politicians in the UK may just have been shown how it’s really done.

The android Ai-Da, which is claimed to be the world’s first ultra-realistic AI robot artist, was questioned by a committee in the British parliament on Tuesday.

The politicians from the Communications and Digital Committee in the House of Lords asked the robot - named after the 19th century computer pioneer Ada Lovelace - about the relationship between artificial intelligence, robots, and the arts.

"I do not have subjective experiences despite being able to talk about where I am and depend on computer programmes and algorithms who are very not alive. I can still create art," said the robot.

Ai-Da was created in collaboration with robotic creators Engineered Arts, with AI algorithms created by experts at the University of Oxford.

"The robot is providing evidence, but it is not a witness in its own right. And I don't want to offend the robot, but it does not occupy the same status as a human and that you as its creator, are ultimately responsible for the statements," said Tina Stowell, Baroness Stowell of Beeston, to Aidan Meller, Ai-Da’s creator.

Ai-Da can "see" with the help of two cameras, one in each eye, which is connected to a computer vision system that is then interrogated by an AI algorithm.

The first robot to appear before the House of Lords

Meller said he learned a lot while developing the project.

"The biggest thing that I've seen, which absolutely takes me to my core, is actually not so much about how human-like Ai-Da is, but how robotic we are. The algorithms that run our systems are extremely able to be analysed, understood, and created," he said.

Thanks to her cameras, Ai-Da is able to do portraits of people that stand in front of her.

She can also draw the faces of people if engineers upload a picture for her.

"The role of technology in creating art will continue to grow as artists find new ways to use technology to express themselves and reflect and explore the relationship between technology, society, and culture," Ai-Da told the committee.

The team behind Ai-Da hopes that the robot will provoke discussions about the future of artificial intelligence and robotics.

Ai-Da is the first robot ever to appear before the UK's House of Lords, the upper house of the UK parliament.

In 2018, Pepper the robot gave evidence to a House of Commons education committee.