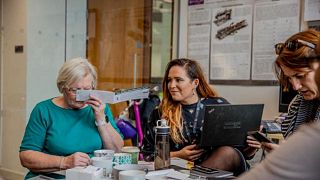 Joy Milne (left) discovered that she can distinguish Parkinson's in individuals from a distinct body odour before clinical symptoms occur.   -   Copyright  University of Manchester
By Natalie Huet  •  Updated: 07/09/2022

Scientists in the UK have harnessed one woman’s extraordinary sense of smell to develop a test that could determine in just three minutes whether people have Parkinson’s disease.

Researchers at the University of Manchester were helped by Joy Milne, a Scottish grandmother who discovered she could detect the neurodegenerative illness in people from their distinct body odour.

British media report that the 72-year-old, who has hereditary hyperosmia – a heightened sensitivity to smells – noticed that her late husband developed a different odour more than a decade before he was diagnosed with Parkinson’s.

She described a musky aroma, different from his normal scent.

The team in Manchester investigated her observation and discovered that Parkinson’s disease indeed has a particular odour. They found the smell is strongest on patients’ upper backs, where sebum, an oily substance produced by the skin, tends to amass.

The researchers have since designed a test that can identify people with Parkinson’s using a simple cotton swab run along the back of their neck.

“We are tremendously excited by these results which take us closer to making a diagnostic test for Parkinson's disease that could be used in clinic,” Professor Perdita Barran, who led the research, said in a statement.

There is currently no specific test for Parkinson’s, and diagnosis is solely based on a patient’s symptoms and medical history.

The study, published on Wednesday in the Journal of the American Chemical Society, found that there are specific lipids that are substantially more active in people suffering from the disease.

The research used a sample group of 79 people with Parkinson’s compared with a healthy control group of 71 people.

The sampling procedure they developed is simple and non-invasive as it only involves swabbing samples of sebum in clinics from the upper back of patients and mailing them to a lab.

Sebum is an oily secretion from sebaceous glands under the skin which are connected to the endocrine system.

The researchers analysed these sebum samples using mass spectrometry and found more than 4,000 unique compounds, of which 500 were different among people with Parkinson’s compared to the healthy control group.

A breakthrough for diagnosis?

The team says their method can be performed in as little as three minutes from swab to results and represents a major step toward a clinical method for confirmatory diagnosis of Parkinson’s.

"This test has the potential to massively improve the diagnosis and management of people with Parkinson’s disease," said Professor Monty Silverdale, the study’s clinical lead.

The scientists now also hope their findings could possibly help diagnose other diseases through non-invasive sebum analysis, and have launched a new start-up, Sebomix Ltd, to delve deeper into this.

Altered sebum production is a well-recognised feature of Parkinson’s.

The Press Association reports that in the early stages of their research, the scientists asked Milne – the "super-smeller" – to sniff T-shirts worn by people who had Parkinson’s and others who did not.

Milne correctly identified the T-shirts worn by Parkinson’s patients, but also said that one from the control group smelled like the disease. Eight months later, that person was diagnosed with the disease.

The trial at the University of Manchester is ongoing and has already recruited over 2,000 patients. The research is funded by the charities Parkinson’s UK and the Michael J Fox Foundation, as well as the Royal Society.

Milne, meanwhile, is now working with scientists around the world to see if she can smell other diseases such as cancer and tuberculosis, the Press Association reports.

She told the agency she can sometimes smell people who have Parkinson’s while out and about, but has been advised by medical ethicists not to tell them.

"Which GP would accept a man or a woman walking in saying ‘the woman who smells Parkinson’s has told me I have it’? Maybe in the future but not now," she said.