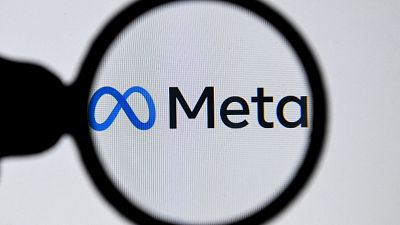 Facebook's parent company Meta will be under the spotlight this week.   -   Copyright  KIRILL KUDRYAVTSEV/AFP
By Pascale Davies  & Reuters  •  Updated: 29/07/2022

Big Tech is in the spotlight this week as the most valuable companies in the United States report how they have fared this quarter amid the global economic turmoil and as the pandemic-era tech booms appear to have slowed.

Tech giant Apple on Thursday revealed its third quarter results, which narrowly beat market expectations for sales and profit. Apple's revenue rose by 2 per cent during the quarter, which is sluggish compared to last year's 36 per cent growth during the same period last year.

However, the results also showed slowing growth for the iPhone maker with investors concerned about a smartphone slowdown as other companies have signalled a waning demand for smartphones and PC as consumers face recession and high inflation and a strong dollar.

“We do see inflation in our cost structure,” Cook told CNBC in an interview. “We see it in things like logistics and wages and certain silicon components and we’re still hiring, but we’re doing it on a deliberate basis”.

E-commerce giant Amazon also posted rosy results on Thursday. It reported its sales for the last quarter grew more than expected despite the economic turmoil.

While the results allowed investors to breathe a sigh of relief that they had not been worse, other tech companies saw bumpier quarters.

On Wednesday, Meta, the owner of Facebook and Instagram reported its first-ever revenue decline and predicted a dip in revenue for the next quarter.

The social media giant, whose social media platforms are dependent on advertising, said its ad sales were hurt as businesses are cautious to spend on advertising due to economic instability since the war in Ukraine. The company also blamed softer e-commerce spending.

“Engagement trends on Facebook have generally been stronger than we anticipated and strong Reels growth is continuing to drive engagement across Facebook and Instagram,” META CEO Mark Zuckerberg said on a conference call with analysts.

“That said, we seem to have entered an economic downturn that will have a broad impact on the digital advertising business. It’s always hard to predict how deep or how long these cycles will be, but I’d say that the situation seems worse than it did a quarter ago”.

The social media giant is under pressure after a 50 per cent stock drop this year, meaning the company’s market cap has sunk below $500 billion (€492 billion), making the company worth less than Tesla.

Do more with less

Meta and other technology companies such as Google have said they will hire less given current economic conditions.

Revenue growth also slowed to 13 per cent in the quarter from 62 per cent a year earlier, when consumer spending was higher after COVID-19 lockdowns lifted.

But investors focused elsewhere, notably on Google’s ad business which beat targets, despite “uncertainty” in the economy, which Alphabet executives cautioned on a call with investment analysts.

Alphabet reported second-quarter revenue of $69.69 billion (€68.66 billion), 81 per cent coming from Google's ad business, and nearly in line with the average expectation of $69.88 billion among investment researchers tracked by Refinitiv.

By contrast, shares of Snap fell more than 25 per cent last week after the company missed sales expectations and warned of an ad market slowdown.

Alphabet executives said Google was not immune to the pullback, which has been brought on by clients facing product shortages, less demand and a variety of other factors.

Rising wages, as well as rising prices of fuel and other items, have forced some ad buyers this year to pare marketing.

Not so cloudy for Microsoft

Meanwhile, Microsoft reported its slowest revenue growth since 2020. The US tech giant reported a profit of $16.7 billion on revenue of $51.9 billion (€50 billion) for the quarter.

It blamed changing exchange rates and challenges in advertising as well as suffering personal computer sales due to production holdups in China and lower demand.

But Microsoft's forecast revenue this fiscal year would grow by double digits, driven by demand for cloud computing services Azure.

The strong outlook shows Microsoft continues to benefit from the pandemic-led shift to hybrid work models and comes at a time when investors are bracing for an economic downturn, with inflation soaring and consumers cutting spending.