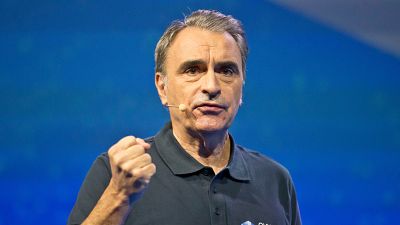 Faced with competition from massive multinationals like Google, Amazon and Microsoft, is it possible for home-grown European companies to stake a place for themselves in the cloud services industry?

If you take the example of OVHcloud, a French company founded in 1999 by Octave Klaba, the answer would seem to be: yes, with caveats.

Challenges for the European tech sector

But despite the runaway success of his own company, CEO Michel Paulin is quick to outline the main challenges for European tech companies compared to their US and Chinese counterparts.

“Today, [in Europe] there is no reason to believe that our engineers aren’t as good, that our companies aren't as good. There are plenty of areas that show Europe has the right capabilities,” Paulin told Euronews Next.

One of the challenges relates to public policy and specifically the system of public tenders in Europe. Paulin contends that these tend to favour US hyperscalers as opposed to their European counterparts.

“If we take OVH as an example, we haven't received any public financing since the company was set up 23 years ago. None,” he said.

“So it's an example that today we don't necessarily have their confidence. And 80 per cent of public tenders go to American hyperscalers”.

We have identified seven cases that show, we are convinced, that today certain players including Microsoft, use methods that go against the rules of a competitive and fair market

Another factor is that European companies don’t have the same kind of access to capital and private investment as American companies, although Paulin notes that “we are starting to see an improvement in these areas”.

The final challenge relates to human capital - European companies’ ability to attract and retain the kind of talent that is key to driving growth in the sector here.

“Education, doctoral students, access to the skills market is really important and we have to create this ecosystem around these four factors to be able to innovate,” said Paulin.

Taking on Microsoft in Europe

In addition to these challenges, companies like OVHcloud in the cloud space also have to contend with US giants, in their words, abusing their dominant position and imposing their tech solutions on market players and customers.

This issue is the subject of an antitrust complaint that OVHcloud filed against Microsoft with the European Commission earlier this year.

“We have identified seven cases that show, we are convinced, that today certain players including Microsoft, use methods that go against the rules of a competitive and fair market,” said Paulin.

“Whether through technical clauses, legal clauses or pricing clauses, in the end these [practices] hinder healthy competition and force market players and customers to use Microsoft's solutions, particularly Microsoft Azure, in a way that’s systematic and abusive,” he said.

OVHcloud remains confident in its ability to win the case, partly because of positive signals from Microsoft in response to the complaint.

“The president of Microsoft has made announcements and has come to Europe to say that he was taking things into account,” said Paulin.

In a blog post dated May 18, the president of Microsoft, Brad Smith, wrote that “while not all of these claims are valid, some of them are, and we’ll absolutely make changes soon to address them”.

“As a major technology provider, we recognise our responsibility to support a healthy competitive environment and the role that trusted local providers play in meeting customers’ technology needs,” Smith said, adding that Microsoft would revise its licensing deals and make it easier for cloud service providers to compete.

The goal of OVHcloud ultimately is to ensure a level-playing field between all the companies working in the cloud sector.

“We know that Microsoft, I hope, will react. Because yes, we think, and they are not the only ones, that there are actions today that are anti-competitive”.

Five ways the world is actually doing better – in data