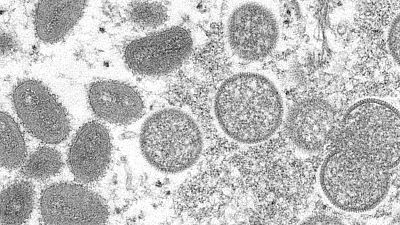 The number of confirmed cases of the monkeypox, a virus related to smallpox that is typically limited to Africa, is growing.   -   Copyright  AP Photo
By Jack Ramage  & Luke Hurst  •  Updated: 28/07/2022

The number of confirmed cases of monkeypox, a virus related to smallpox that is typically limited to Africa, is growing - particularly in Europe and North America, which has prompted the World Health Organization (WHO) on July 23 to declare a global health emergency over the outbreak.

The virus, which is less deadly than smallpox, typically lasts for two to four weeks, and symptoms can appear anywhere from five to 21 days after infection.

Although health professionals across the globe stress the risk to the general population is low, it is important to know how monkeypox spreads and what you can do to protect yourself from infection.

Typically, monkeypox is known to spread to people who have had contact with infected animals. This could be following a bite, scratch or consuming uncooked animal meat.

Monkeypox can also spread from human to human. Although this was originally thought of as rare, the recent and unusual rapid rise of infections outside of west and central Africa has raised concerns.

It is typically spread between people in three ways: inhaling respiratory droplets; directly touching an infected person; and, less often, through indirect contact – such as through clothes or linen that have been in contact with fluid from sores.

The virus is generally not considered a sexually transmitted infection (STI) and it is not known to be spread through semen during intercourse.

However, the WHO says monkeypox is currently being mostly spread through the prolonged skin-to-skin contact that occurs during sex.

This means that while condoms may protect against most STIs, they likely are not enough to prevent the transmission of monkeypox.

“Close-contact sexual transmission is the key mode of spread, but cases are being detected through household transmission episodes, and sometimes with no clear exposure history at all,” Dr Hans Kluge, WHO Regional Director for Europe, said on Tuesday (July 26).

So far, the majority of cases have been spread through sex with a particular concentration among men who have sex with men. However, anyone can be at risk of catching the virus.

These included “promoting the reduction of the number of sexual partners where relevant”, and special measures at “events with venues for sex on premises”.

He also called for engagement with organisers of events that might be “conducive for encounters of intimate sexual nature”, to encourage personal safety and protection, and for organisers to potentially postpone events where protective measures cannot be put in place.

The WHO has also called on the world to “act together in solidarity” regarding the distribution of treatments, tests and vaccines.

How can you protect yourself against monkeypox?

One of the best ways to protect against monkeypox is to get vaccinated.

Unlike with the COVID-19 vaccine, there is currently just one company producing an approved monkeypox vaccine, so supplies are somewhat limited.

The Danish biotechnology company Bavarian Nordic produces the Imvanex vaccine, and on Monday (July 25) the European Commission gave permission for it to be marketed as protection against the virus. This followed the recommendation the week before by the European Medicines Agency (EMA).

Imvanex was previously only approved in the EU to treat smallpox, but the company had already supplied the vaccine to several EU countries during the current monkeypox outbreak for what is known as "off-label" use.

The approval is valid in all European Union Member States as well as in Iceland, Liechtenstein, and Norway, Bavarian Nordic said in a statement.

Aside from getting vaccinated, there are a number of other precautions people can take to decrease the risk of catching monkeypox.

“Consider limiting your sexual partners and interactions at this time. This may be a tough message, but exercising caution can safeguard you and your wider community,” Kluge said this week.

According to the United Kingdom’s National Health Service and the United States’ Centers for Disease Control, the best precautions are:

What should you do if you catch monkeypox?

If you suspect you have monkeypox, the advice is to get tested at a healthcare facility or sexual health clinic, where a PCR test can be carried out.

Initial symptoms of monkeypox can consist of headaches, muscle aches, swelling, back pain and fever.

Within one to five days of infection, lesions and rashes typically occur across the body - on the hands, face, feet, eyes, mouth and genitals. These eventually turn into raised bumps which form blisters, some also fill with white fluid before breaking and scabbing over. This fluid can be infectious.

If you have these symptoms or suspect that you may have contracted the virus you should isolate yourself from physical contact with others and seek medical advice immediately.

If you have contracted the virus, you will be required to isolate until you have recovered.

Individuals who catch monkeypox typically recover within two to four weeks. The symptoms can be confused with other illnesses - such as herpes, syphilis or chickenpox - so it is important to confirm with a medical professional as soon as possible.